Intel’s 8th Gen CPUs Are More Powerful Than We Thought

According to the data presented, the new generation of processors provides a 40% higher performance in terms of computing power, compared to 7th Generation Intel Core processors, something that surprised the public positively.

In real terms, this means we will be able to watch ten hours of video streaming in 4K. In addition, tasks like photo editing can be up to 48% faster now.

But the great news does not stop here. One of the new features of these processors has been surprising. The new Turbo Boost technology from Intel (version 2.0) allows you to increase the processor frequency according to the task required to be performed even more compared to the previous Generation, and still be more efficient.

The new processors introduced last Monday are part of the U-series for handheld and hybrid computers. With 4 cores and 8 threads, Intel was able to increase the maximum clock speed to 4.2 GHz on the i7-8650U and 3.4 GHz on the i5-8250U; speeds in my opinion and that will be more than enough for most users. 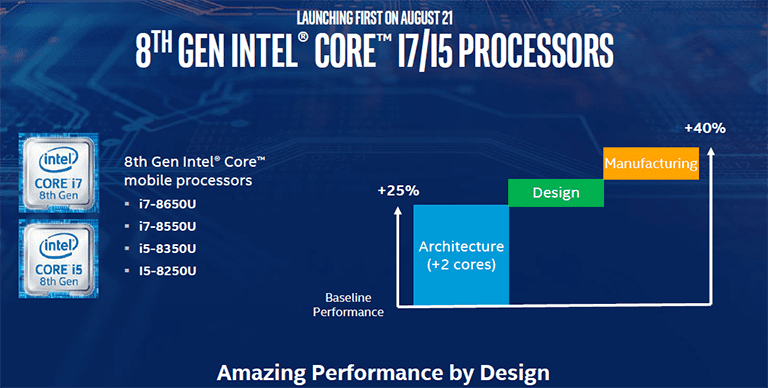 Undoubtedly, these new Intel processors have proven to be incredibly capable and promise great computing power. Right now it’s in the hands of big brands. Hopefully, the tech giants like Apple, Microsoft and other hardware manufacturers will include these new processors in their next computers or laptops.

So, what do you think about these Intel’s 8th Gen Core processors? Simply share your views and thoughts in the comment section below.