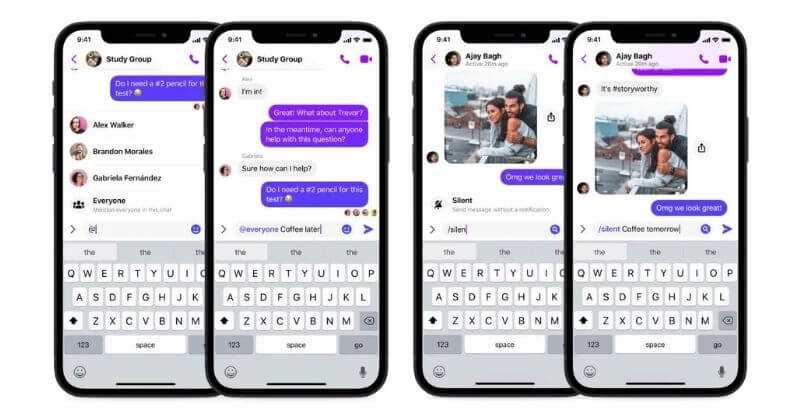 Facebook Meta has added a new feature to its Messenger app. A several new shortcuts have been added to the app that lets the users to send silent messages using the commands in the chatbox.

Users can now publish commands in the chat to perform different tasks like sending a silent message without notifying other users. Also, one can send GIFs and ASCII emoticons on the Messenger app.

The new shortcut feature reminds us of defunct MSN Messenger’s ‘Easter Egg’ commands. It is designed to make a few tasks on Messenger easier by using one-word commands.

You Can Now Message Friends Without Notifying Them

The company is adding a new Slack-like “@everyone” function that notifies all participants about the new message. According to Meta, this new feature is perfect for group reminders or to get a quick response for something.

Meta has also rolled out “/silent’ functionality. This means, before sending a message in the group, you can type “/silent,” the members of the group will not get a notification of your message.

This feature helps you if you don’t want to trouble someone and allows the users to read the messages when they want to.

These two features are available today, and the company has also hinted about some upcoming shortcuts which will be out in the coming weeks.

Facebook is planning to launch a new shortcut, “/pay,” in the US. This will be easy to send and receive money in one-on-one Messenger chats.

We will also see a “/gif” shortcut that lets users quickly find and send GIFs. However, this will be limited to iOS users only. Apart from this, iOS users will also get shortcuts like “/shrug” and “/tableflip.” These shortcuts will type out ¯_(ツ)_/¯ and (╯°□°）╯︵ ┻━┻ emoticons.

These shortcuts can be used on Messenger to message a user or in a group by using the command. When you use the command, the users will be notified about the message depending on the command they have used.