We all know very well that the well-known Chinese smartphone manufacturer Xiaomi recently, announced its top of the ranges, the Mi8 and Mi8 SE. However, now according to the latest reports, Mi 8 managed to beat iPhone X & Pixel 2 in the DxOMark test.

As usual, with each new great launch in the world of smartphones, DxOMark presents its careful evaluation to the cameras of the equipment, evaluating both the performance in terms of photography and video.

While Xiaomi does not have a great history of good scores in the list of DxOMark, in its last releases it has managed to surpass itself. With its Mi Note 3 was able to match models such as HTC U11 or Google Pixel, with Mi MIX 2S, it was placed at the level of Huawei Mate 10 Pro and iPhone X, and now, with its new Mi 8 occupies the 5th place with the best camera-level score.

The Xiaomi Mi 8 was unveiled last week surprised the market with a version that already includes a fingerprint sensor embedded on the screen that brings 3D facial recognition. But today the focus is directed to its camera, which received 99 points by specialist DxOMark. This score puts the Mi 8 ahead of big names like Google Pixel 2, iPhone X and Huawei Mate 10 Pro.

The camera of Mi 8

The rear camera module of the Mi 8 is dual 12 MP, with a wide-angle lens with a 1/2.55″ size sensor, 1.4 μm of pixels and an F/1.8 aperture lens; the other lens is telephoto with F/2.4 aperture. It allows automatic and manual focus, has facial detection, 4-axis optical image stabilizer in the wide angle and still has LED flash.

The evaluation of DxOMark

According to DxOMark, the evaluation of smartphone cameras is based on the capture of more than 1500 test images and more than 2 hours of video in controlled laboratory environments and in natural internal and external scenes, using the default settings of each camera. 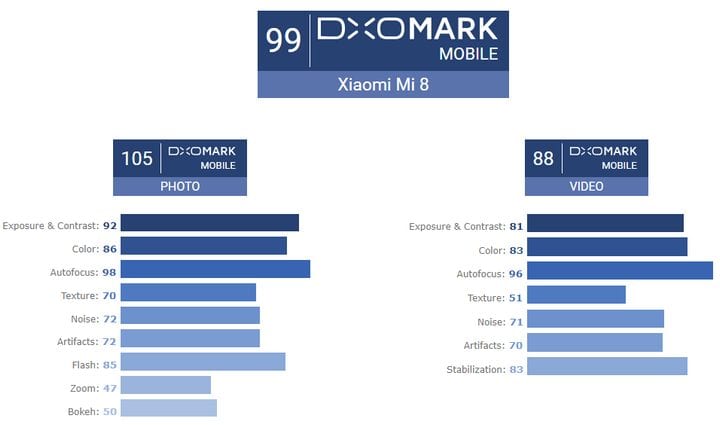 The Mi 8 thus received an overall score of 99 points, offering some improvements in certain areas compared to the previous Mi MIX 2S model, putting it shoulder to shoulder with the Samsung Galaxy S9 Plus and ahead of Google Pixel 2 and iPhone X.

The Xiaomi Mi 8 was considered by DxOMark to be very strong in the photography category, achieving a very high score of 105 points, thanks to the combination of exposure and contrast, rich colour rendering and fast and precise focusing. The bokeh effect was also well achieved, with blur transitions being classified as smooth.

In the video, the rating is no longer as good as in photography, which causes the overall score to stand at 99 points. In the video, it has scored 88 points. In this field, the stabilization so important in video and the fastness of focus receive a very positive note.