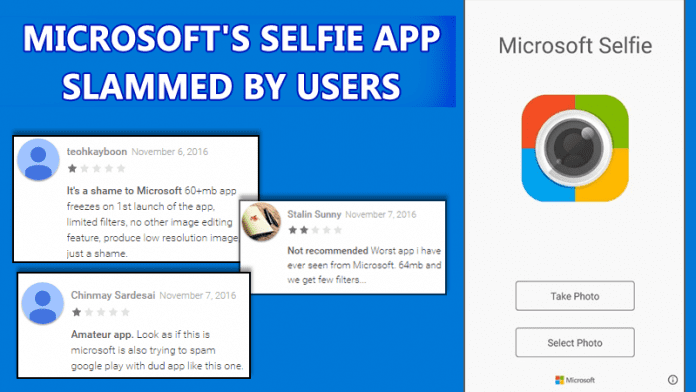 Microsoft has just launched its Selfie app on Android, after previously offering it on iOS. However, it was slammed by users.

Microsoft Launched A Selfie App For Android, Gets Slammed By Users

It’s almost a year when Microsoft launched a Selfie app for iOS platform. Now, Microsoft Selfie app had finally arrived in Android Platform. The reason behind this launching this app is still a mystery.

Microsoft might want Android users to take better selfies so they launched a dedicated app for selfie lovers. However, if we take a look at Google Play store, there are the variety of apps available that are specially built for taking better selfies.

The Selfie app from Microsoft is aimed at improving selfies. The app description in Google play store is “Microsoft Selfie is a selfie and photo-enhancement application available on Android, iOS, and the web. Backed by computer vision technology, Microsoft Selfie intelligently considers age, gender, skin tone, lighting, and many other variables – all with one click. Users can transform average photos into enhanced, natural photos in seconds.”

There is no extra feature added. This app is similar to Retrica, Candy camera and much more available on Play Store where users can find and select filters according to their wish.

The Selfie app from Microsoft is also capable of adjusting the brightness, contrast, exposure, color balance and lighting. This actually does a good job in improving the image quality of selfies. However, the Play Store story tells a different story!

The app is getting the negative reviews. Some of the users claimed that they can only see the logo and the app suddenly stop and few are claiming that the app crashes as soon as they select a photo or click a new one using a camera.

Atharv Kurdukar wrote on Play store “Doesn’t work The app crashes as soon as I select any photo or take a new one using a camera.”

John Lv wrote, “Meh Well, sorry Microsoft, but it’s just a poor app with little effects, that’s all. I thought that it will be something really useful, but it’s useless at all.”

There are many more negative reviews out there in Google Play store. However, if you want to try this new app from Microsoft then here is the link. Express your views in comment box below after using the app.