Nobody can deny at this point that the tech giant Microsoft is a company that works very hard in order to meet the needs of its millions of users around the world, something that in most cases achieved, as evidenced by the successes that have been accumulating over the years with many of its products.

At the same time, it has also suffered serious setbacks, such as the one that is currently experiencing the complete collapse of its operating system for mobile devices, of course, I am talking about the Windows Phone, which, as we have said on many occasions, is doomed to the most absolute failure for now.

However, the truth is that its other proposal but for desktop environments in its different versions, Windows, is the undisputed leader of this market.

What many think in parallel to all this, is that a constant in which Redmond’s signature does not hit too much is in the names it chooses for its products, since in many occasions they generate more confusion than anything else.

Well, the reason we are talking about the names of the products of the technology giant, of course, Microsoft is that we assume that by mistake, just filter the final name that will be assigned to the next big update of Windows 10 that will come to light next spring. 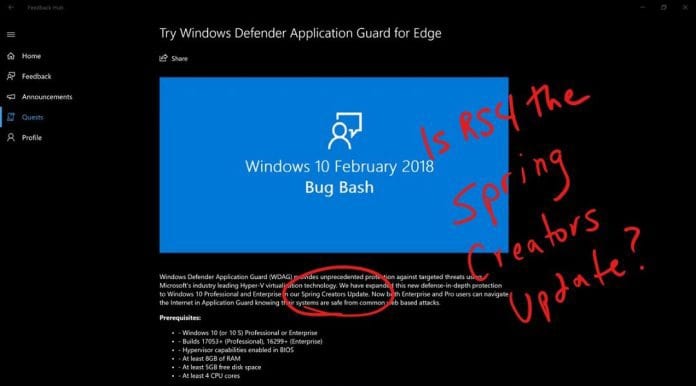 This is something that has been known based on the most recent Bug Bash advertisement of the Insider program of the firm itself, where you could see the name that we mentioned.

The Redstone 4 will be renamed Windows 10 Spring Creators Update

Well, continuing in its line of recent times, it is likely that the Redstone 4 will be definitively called “Windows 10 Spring Creators Update”, although this is something that seems to have been a leak that has passed by high to the firm, so it has not yet been confirmed officially, although everything indicates that this will be actual name for the next update. In this way, it is clear that the tech giant Microsoft plans to continue with the “brand” “Creators” for its most recent major updates.

Similarly, it goes without saying that the reference of “Spring Creators Update” is so because it has long been known that the first major update of Windows 10 for 2019 will arrive next spring, in particular, it is expected to be an end of March.