The Redmond company Microsoft has again recently released this week a new comparison video showing how the Microsoft’s Microsoft Edge browser outperforms its rivals when it comes to the energy efficiency on the laptops.

Microsoft Again Shows That Edge Is More Efficient Than Chrome

Three Laptops exactly the same, an identical video that runs again and again but under three different browsers. Which will be better? If you say that the test has been done by the tech giant Microsoft and you have an answer.

Once again, the ‘pique’ between Microsoft and Google continues to demonstrate that its relevant browsers are better than those of the competition, and this time it is time to teach the good features that will demonstrate the new browser Edge Creators Update Of Windows 10.

It is difficult to measure the battery life of a computer because even under identical devices there are thousands of factors that are not available to a user to elucidate why the battery of a PC lasts more to one person than another. The browser war to know the best of the market continues, and perhaps to try to bridge the gap with the hegemony of Google Chrome, Microsoft has released a new comparison video demonstrating the efficiency of Edge against browsers such as Firefox or Chrome itself.

It is usual that there are such clashes, however with the launch of Windows 10 and Microsoft made a similar video to sell the features of Edge, which later Google answered with an improved version of Chrome, and replicated Microsoft as if it were a child’s play. However, in this new browser comparison video shows that, at least in these conditions, Microsoft Edge has proven to be more efficient than its rivals. 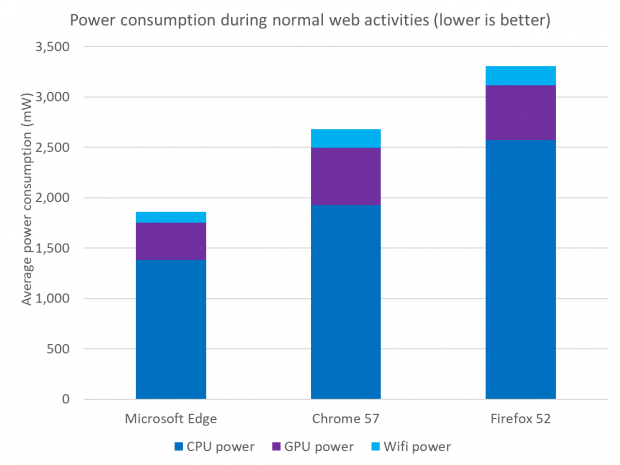 The tech giant Microsoft explains that to do this test they have used their own technology called BrowserEfficiencyTest where they have concluded that Edge uses 31% less energy than Chrome and 44% less than Firefox. Now it’s the turn of the tech giant Google in this endless replica between browsers war.