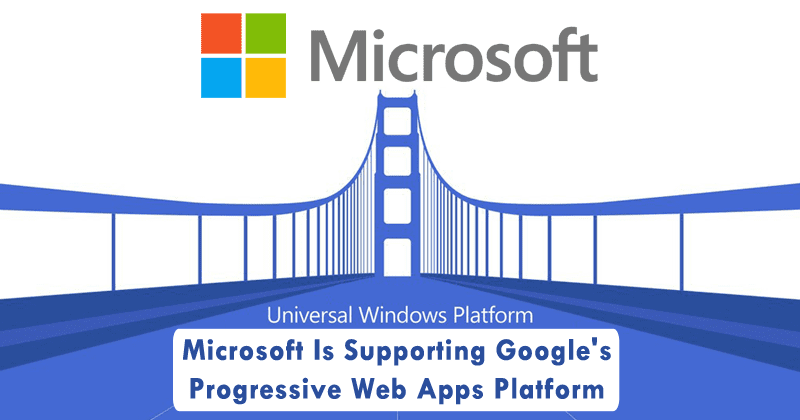 The tech giant Microsoft, since the launch of Windows 10, has tried to create an increasingly unified and universal operating system. One of its great assets in this great goal was to unify the very core of the operating system, but Microsoft has been working on other fronts as well.

With the launch of Windows 10, it has also announced the Windows Universal Platform that allows you to create applications that work in all Windows environments and without major changes at the code level.

Later, it also launched Project Centennial to bridge the gap in applications in the Windows Store and more recently announced the support for Progressive Web Apps (PWA), initially designed by the tech giant Google.

Progressive Web Apps are a concept that hybridizes the web apps and native applications we all have in our devices. PWAs have the multi-platform features of web apps, their simplicity of editing and application of these editions and also their ease of access and “installation/update”. In addition, they combine some of the attributes of native applications, among them the “feeling” of using a real native app, its security, push notifications and the possibility of being used offline.

As we can see, PWAs have great potential for development and can be a reference in the way we consume online content nowadays. On more limited hardware it can also be very interesting because it consumes less resources and disk space compared to the corresponding “native app” version.

Currently, the only browser to support running PWA is Google Chrome. However, given the potential success of this project, there are several browsers trying to join Google in this initiative. Among these is the tech giant Microsoft’s Edge, which in this way may contribute to the scarcity of applications available to the Windows ecosystem.

The tech giant Microsoft announced that the next major update of Windows 10 after Fall Creators Update will bring support for Edge to run such applications. However, Microsoft does not only intend for Edge to run these types of applications but also to have them arrive in the Windows Application Store, which has a more in-depth integration with Cortana and Windows 10 itself, such as the ability to interactive notifications in the Action Center and also Live Tile.

After the launch of UWP that was intended to stimulate the development of native applications for Windows, Microsoft now advances to Progressive Web Apps with the goal of bringing them to its operating system and in this way making Windows 10 more complete and attractive to consumers. Having fully grasped the gap it faces with the shortage of applications available for Windows and also its goal of creating a true cross-platform ecosystem, Microsoft has just taken a step forward in these goals.