The well-known leakster Evan Blass expands his file of leaks after the publication of an image in which the Motorola Moto E5 Plus appears. According to the latest reports, the new Moto E5 Plus render leaked ahead of the official launch which has revealed all the design details of the device.

Contents show
Moto E5 Plus Render Leaks Ahead Of Launch, Reveals Design Details
Design and materials of the Motorola Moto E5 Plus
Screen with 18:9 aspect ratio, “without frames”
Apparently, without double camera

Evan Blass expands his file of leaks after the publication of an image in which the Motorola Moto E5 Plus appears. A photo apparently coming from the marketing department of Motorola through which you can extract some ramblings and possible characteristics of the Moto E5 Plus, although the most interesting focus of information focuses on the design and materials of the smartphone.

The Motorola Moto G was, for a time, the cornerstone of the mobile division of the firm. Mid-range models featured in features, finishes and design at a reasonable price. However, the entry range has also gained weight in recent years. While the Moto C range is the most economical of the firm, the Moto E range has managed to gain an important gap between the access range of Motorola and the ever-widening jump to the Moto G.

Design and materials of the Motorola Moto E5 Plus

A position that the new generation of the Moto E will win hard, at least as far as the Motorola Moto E5 Plus is concerned, if it ends up confirming the information that the last image filtered by @Evleaks reflects.

As it can be seen in the photo uploaded to Twitter, the design and level of finishes of the Motorola Moto E5 Plus cover offer a great improvement over the Moto E4 Plus. Although for colours tastes – there will be users who prefer metal – the Moto E5 Plus shows a casing supposedly made of glass.

At least that is what we interpret according to the powerful reflections of it under the perspective in which the smartphone has been captured. However, we can not rule out that it is actually a layer of polished polycarbonate, taking into account the curved line of the carcass in the lateral folds.

In the same way, a priori, the thickness of the terminal seems more stylized. A factor that could well impact on one of the most significant characteristics of the Moto E4 Plus as is the capacity of its battery, 5000 mAh.

Therefore, it is possible that Motorola reduces this parameter. It does not necessarily have to imply a reduction of autonomy since the components may have been optimized to compensate for that possible loss.

Screen with 18:9 aspect ratio, “without frames”

Speaking of components and possible characteristics of the Motorola Moto E5 Plus, we have to stop at the front. If the casing presents an important change, it is largely due to the update of the screen. Everything indicates that Motorola will introduce the 18:9 aspect ratio in its new Moto E, so it implies more screen in the same space.

In addition to the functionality and appearance offered by a smartphone with similar characteristics, this change involves the transfer of the fingerprint sensor – which in the Moto E4 Plus is located on the Home Front button – to the back, just below the camera. As a curious detail, the filtered image shows how the manufacturer has taken advantage of the inclusion of a screen printing with its logo on the surface of the biometric sensor. 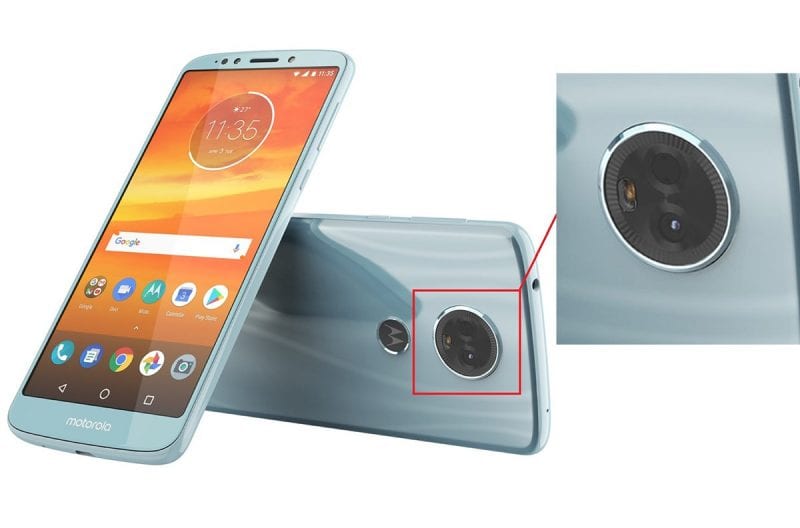 The camera, despite what the blogosphere has indicated, does not seem to include a configuration of the double camera. Although the circular section in which it is available – as in models such as the Moto Z2 or Moto X4 – appears to include two sensors and their respective optics, we appreciate in more detail how in one of the cavities in which the second camera should be housed. There is a reflection of the lens, but rather a compartment in which Motorola seems to have taken advantage of the inclusion of sensors. However, the filtered image does not leave accurate evidence of what the Motorola Moto E5 Plus camera will be like.

In the same way, the front camera does not seem to be accompanied by a second sensor either. Rather everything indicates that it is an LED diode that will make the function of the LED front flash.