According to the latest reports, recently, the well-known researchers at Rice University have developed a new AI (Artificial Intelligence) that can write its own code and program or develop any Android application.

Contents show
This New AI Can Write Its Own Code And Develop Android Apps
BAYOU – The Android app developer
But can you completely replace the programmers?

The profession of programmers, more in the aspect of “debit code”, seems to have already been told, because it was “invented” software that uses Artificial Intelligence to program.

It’s called BAYOU and it was developed by a team of computer scientists at Rice University who received funding from the military and Google.

BAYOU is a deep learning tool that works as a search engine for encoding: say what kind of program you want to create with a few keywords, and this software will return java code that will do what you are looking for, based on your best guess.

The tool was developed by experts at Rice University and funding for the creation of this software was made available by the US military and the tech giant Google. In a study published earlier this month, BAYOU was described with developmental phases and what kinds of problems it can help programmers to solve any error.

Basically, the BAYOU system read the source code of about 1500 Android applications, something like 100 million lines of Java. All this code was fed through the neuron network of BAYOU, resulting in AI that can, yes, program other software. 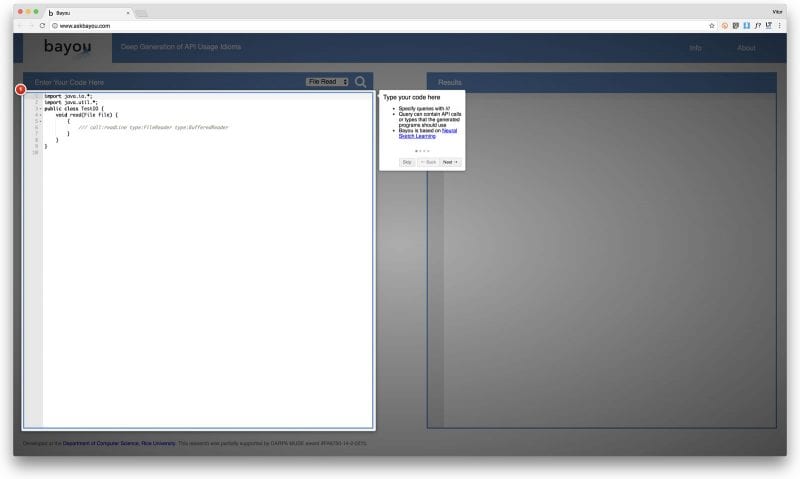 For the computer world may be good news, that is, with this type of programming application, based on Artificial Intelligence, it will be much easier for anyone, even without great knowledge in the field of programming, to create software. Just give some final goal master lines, some functional examples and the AI will generate code samples or even be used to analyze code written on a particular execution scenario.

At this point, the BAYOU application is still at the beginning of its career and the team behind it is still looking for scenarios where its technology works and is needed.

But can you completely replace the programmers?

No, at least for now this system only generates sketches of a program, lines of code relevant to the work that the programmer is doing. These sketches still need to be gathered in the larger work and may have to be adapted to the project in question.

Even if the technology is already crawling, this is an important step in the search for an artificial intelligence programmer, a long-term goal for computer scientists. Other attempts to create something like BAYOU required extensive and narrow restrictions to guide programmers toward the right kind of code.

Because BAYOU can work with just a few keywords, it consumes less time and is much easier to use overall for human operators.