According to the latest reports, in the presentation of Stadia, the tech giant Google made a small joke about the most played game in the world: the dinosaur that jumps when we access Chrome while we do not have an internet connection. Now, they have created a new minigame that is now available for the Google app.

No internet? The Google App Has A New Hidden Game

In the presentation of Stadia, the tech giant Google made a small joke about the most played game in the world: the dinosaur that jumps when we access Chrome while we do not have an internet connection.

Now, they have created a new minigame that is now available for the Google application. As the tech giant Google is popularly known for adding minigames and some easter eggs, like the ones in each new version of Android.

Also Read: How To Backup Android Game Data To PC Without Rooting

Now, they have added a fun minigame directly in the Google application and to use it you must have the most recent version of the application. In our case, we have the 9.46.5.21 released three days ago, and it should be available for that version and all the subsequent ones that are released.

Hence, to be able to access the minigame it is necessary to make a search in the Google application without any type of active internet connection, either through WiFi or through mobile data.

When doing the search in the app, or in the widget of the desktop, a small animation will appear in which it does not put anything on pressing or that will take us to the game. If we press, it will open the minigame. 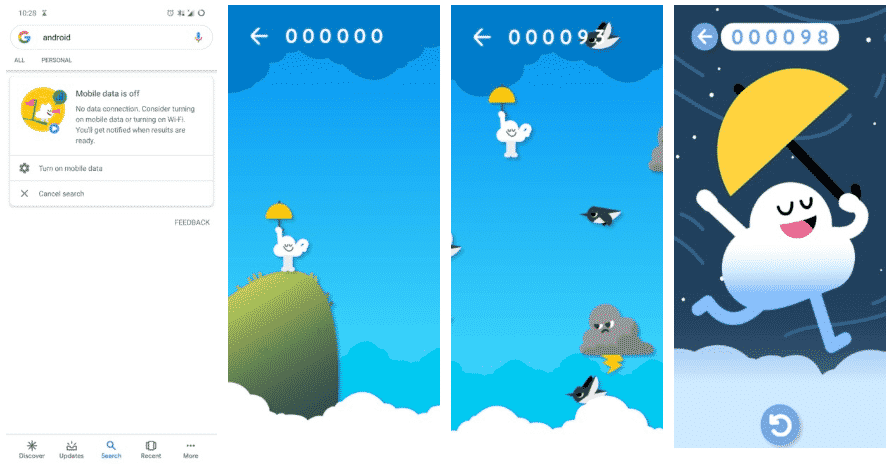 In this game, we take a cloud with a yellow umbrella, and the mechanism of operation is quite same just like the Flappy Bird: make touches on the screen to go dodging birds and clouds with the face of very few friends.

The difficulty of the game is much less than the original Flappy Bird since in this game the cloud tends to float more than in the original title. However, currently the tech giant Google has not named it, but one that comes right down to it could be Flappy Cloud.

If an enemy bird hits us or we come in contact with some dark cloud with lightning, we lose the game, and we will get a final score. In the lower part, we can give it to take us back to the game to play again.

As we can see, it is a much more advanced game than the dinosaur and with a better graphics quality, with the advantage that now we can choose between one or the other depending on whether we use the Google or Chrome app.

As we said, it is necessary to have version 9.46.5.21 of the Google application, which is already available in the Play Store. So, what do you think about this? Simply share all your views and thoughts in the comment section below. And if you liked this post then simply do not forget to share this post with your friends and family.