We all expected that soon Nokia will launch its most awaited Android-powered Flagship Smartphones. But, recently, the new leak shows that Nokia 9 will feature a dual 13MP camera, 5.3″ QHD display, Snapdragon 835 and much more.

Nokia 9 Spotted On Geekbench With Snapdragon 835, 8GB Of RAM

One of the most anticipated phones this summer, along with the OnePlus 5, we are talking about Nokia 9, the expected first flagship of the reborn Nokia at the hands of HMD Global, which has just passed one of the most outstanding performance tests With no less than 8GB of RAM, a figure that could make it the first mobile with this feature. Geekbench, as we say, is one of the most prestigious performance tests, and we have been able to see the alleged Nokia 9 under the alias “Unknown Heart”.

The first images of the Nokia 9 have already transcended the network and are completely real. The bad thing about these images is that the phone comes inside a protective case to not reveal its final design, but at least lets us appreciate some of the features of the terminal and its specifications, camera, and side slots.

However, if we talk about the specifications of the Nokia 9 then let me clear that the new upcoming Nokia 9 will feature a 5.3 inches display at QHD resolution, Qualcomm Snapdragon 835 processor along with the 8GB of RAM, not only that even it will also come with an internal storage of 64GB, USB Type C. 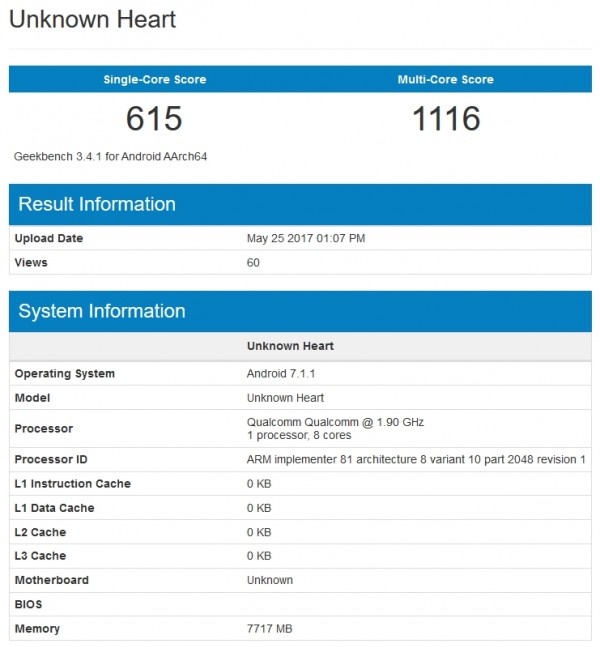 In addition, the test result is clearly showing that the Nokia 9 will come with Android 7.1.1 Nougat, which is the latest version of Google’s operating system. Definitely, the new Nokia 9 could be the great beast of this 2017.

So, what do you think about this new beast Nokia 9? Simply share your views and thoughts in the comment section below.