We think that only technology giants like Microsoft, Google and IBM can work with artificial intelligence, right? But, it is wrong. As according to the latest reports the Nvidia’s new Pint-Sized GPU will simply change your mind.

These days the GTC (GPU Technology Conference) is celebrated, a conference in which members of the graphics sector and, above all, of Nvidia debate and hold conferences. In this year’s edition of the GTC, artificial intelligence, deep learning, autonomous cars, big data and the advances to make life easier with connected cities and sensors that measure our health are the main issues. To investigate in these fields, Nvidia has presented its DGX-2, the most powerful super personal computer in the world.

The supercomputers are huge systems containing multiple processors and graphics cards is primarily for research. A few days ago we told you that Japan was preparing its new supercomputer to find a viable source of energy for the next centuries but also used for artificial intelligence, controlling servers in large technology companies or cloud computing. They are teams focused on large companies, but Nvidia wants its DGX-2 to be in more ‘walk around’ environments.

The rating as ‘supercomputer’ has earned it to pulse. Jen-Hsun Huang, the CEO and founder of Nvidia, held a conference in the framework of the GTC in which he presented the DGX-2, (the relay of the veteran to technological levels) DGX-1. This new Nvidia device is a real beast whose mission will be, mainly, research on topics such as artificial intelligence and not only that even the specifications of the DGX-2 are amazing.

The device has 16 Nvidia Tesla V100 GPUs with Volta architecture and 32 GB of HBM2 memory each. They will be connected with two Intel Xeon Platinum processors and, in total, the device will have 1.5 TB of DDR4 memory, in addition to the total 512 GB of HBM2 memory. Storage is 30 TB NVMe SSD that can be expanded to 60 TB. Specifically, it is about 10 times more powerful than the previous generation thanks to the new Volta architecture and the processors. Here, we leave you the complete specifications below:- 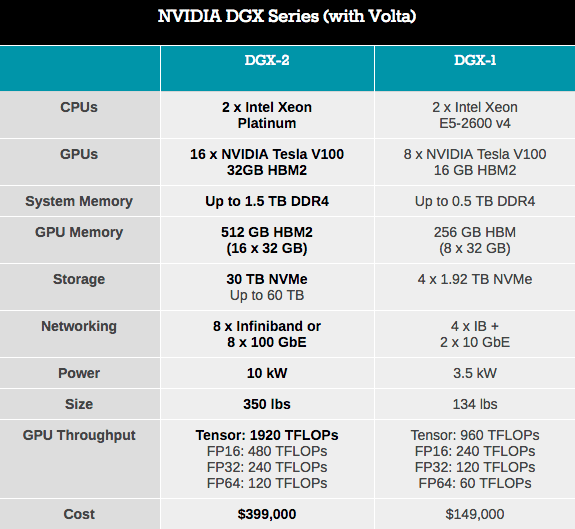 All the components will be connected via a path that grants a bi-directional speed of 2.4 TB that guarantees a minimum latency between GPU and processor (in addition to an NVSwitch connection from Nvidia to connect the GPU at a speed of 300 GB/s). In total, the computer can give a power of 2 PETAFlops, a huge amount for a computer of this type that exceeds the supercomputers of 2012.

This beast consumes 110 kW and will not be easy to move since it will weigh a whopping 160Kg. Of course, everything has a price and that of the supercomputer DGX-2 will cost $399,000. The good news is that the previous version, the DGX-1, remains at ‘only’ $149,000. Yes, players are still waiting for the announcement of Volta.