New filtered images of the OnePlus 6 show how the concept design of the new “flagship killer” of the Chinese company, of course, OnePlus would continue to be inspired by the device of the tech giant Apple, of course, the iPhone X, as shown by its first filtered live images.

New filtered images of the OnePlus 6 show how the concept design of the new “flagship killer” of the Chinese company would continue to be inspired by the terminal of the Cupertino, of course, the iPhone X, as shown by its first filtered images.

This could be the design of the OnePlus 6

OnePlus, the Chinese firm commanded by Carl Pei wants to continue gaining ground in the market segment of top mobile telephony. That is why, surely, in a few months we will have news about a new model: the OnePlus 6.

Meanwhile, as we are used to, we will begin to receive news, rumours and leaks about the design and specifications with which this new “flagship” will count. Now, as detailed by the well-known close sources, we can now begin to observe the first filtered images of this new terminal.

They have been provided by the portal IT Home and in them, we see a possible prototype of OnePlus 6 showing many of the features of iPhone X. For example, the most outstanding is the notch on the screen at the top.

The notch is, perhaps, one of the most distinctive elements of the Apple smartphone, adopted by the manufacturer after deciding to place there the sensors used for its TrueDepth camera, used for 3D facial recognition through FaceID technology.

Other features that can be seen in the likely design of the new OnePlus terminal are its glass back, an increasing trend in high-end terminals, the ever-increasing reduction of front panel bezels, the orientation of its double camera vertically and the location of the fingerprint reader. 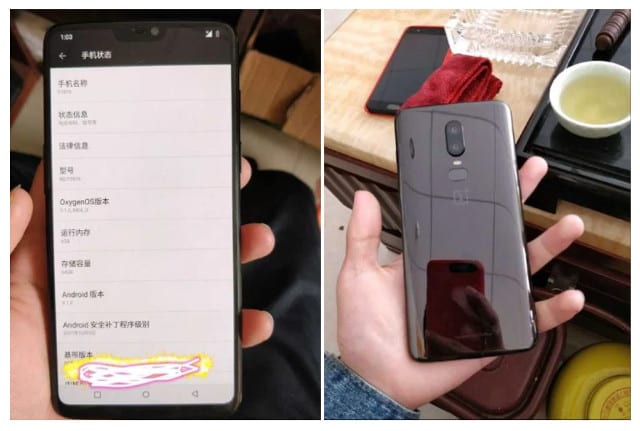 As far as the screen of the probable mobile device is concerned, it can be seen that the Chinese firm continues to decrease the panel’s frameworks, even far beyond what was done with the OnePlus 5T presented in November 2017.

However, it is important to note that these designs are no more than rumours about the possible design of Carl Pei’s next star terminal. As 9to5Google highlights, the same company usually creates several prototypes during the development process, discarding many proposals, until reaching the final design.

The truth is that we will have several months ahead of rumours and speculation about the most outstanding design and specifications of the new flagship terminal of one of the brands that have begun to be a protagonist in the high-end segment of mobile phones.