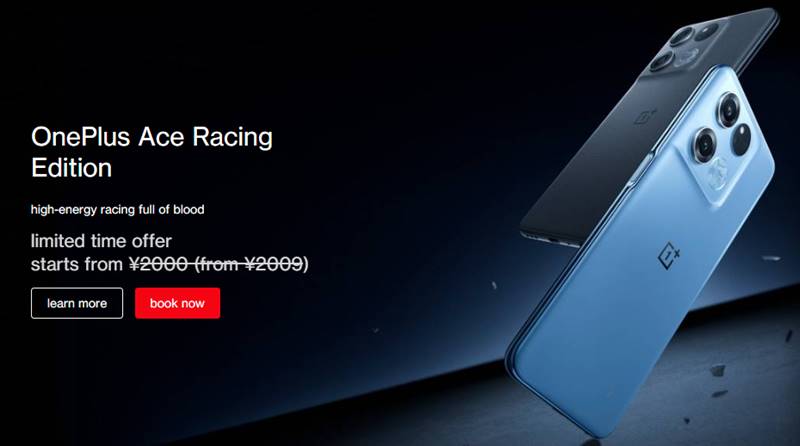 Oneplus has launched its OnePlus Ace Racing Edition in China, which is highlighted as a middle-range budget gaming smartphone. Some of its specs are ultimate, like its chip, and some are below. So, Let’s discuss them briefly.

Previously, OnePlus launched the OnePlus Ace in India with the rebranding of the OnePlus 10R. Now it’s another edition that seems reasonable in the performance segment but has no info for other regions.

Surprisingly, it owns the same chip as the OnePlus Ace, but also, we can see some minor cuts like LCD, but to me, it’s the perfect device for gaming. Despite this, in China, it is now set for booking.

As OnePlus launched its device in India after China’s release, but for this smartphone, currently no confirmation is whether it will release in other regions or not. Still, we can expect to see its launch in India with a sponsor in the upcoming BGMI tournament.

Because in China, the OnePlus Ace Racing edition will be the game choice at the upcoming Peacekeeper Elite League’s Spring tournament (PEL).

The rear camera has a primary 64MP sensor, an Ultra-Wide 8MP camera, and a 2MP Marco lens. The same 16MP selfie shooter in left edge corner as OnePlus Ace.

OnePlus Ace Racing Edition contains a 6.59-inch FHD+ IPS LCD with a 120Hz refresh rate support. Especially for gaming functionality, this device has six modes of refresh rate 30/48/50/60/90/120 Hz depending on the game.

The MediaTek Dimensity 8100-Max chipset powers the OnePlus Racing Edition. The device runs on ColorOS 12 based on Android 12. The RAM variant options 8GB RAM with 128GB/256GB storage, and 12GB RAM with 256GB storage.

As it is gaming phone has some gaming features, such as the Heat-dissipating and Hyper-boost Mode, that gives a constant frame rate.

The OnePlus Ace Racing Edition will be available in two colors variants, Gray and Blue, and a 3.5mm headphone jack, a USB Type-C port for charging and a side-mounted fingerprint scanner but there is no side alerter.

OnePlus Ace Racing Edition will go on sale for the first time on May 31st in China.