We all know very well that whenever we think of concepts used to damage computers, you think that what is being used to perpetuate the attack. In this case, we are dealing with malicious entity software or in a basic word you can say a Ransomware that encrypts the content stored on your computer or blocks your access.

Whenever you think of concepts used to damage computers, you think that what is being used to perpetuate the attack. In this case, we are dealing with malicious entity software that encrypts the content stored on your computer or blocks your access. This attack calls for a rescue, hence the term ransom, which means rescue, to decrypt or unlock such files.

The most well-known case, which happened just a few months ago and mentioned earlier, is WannaCry. But it has not been the only one to infect millions of computers throughout history.

According to the website Securlist, owned by Kaspersky Lab, yesterday, October 24, 2017, were arriving warnings of massive attacks with a common denominator, the name of Bad Rabbit. This ransomware seems to have affected both individuals and businesses and, above all, has been spread by Russia, although there have also been known cases of infection in Ukraine.

In addition, the attacks are affecting larger areas, according to information provided by the BBC, such as three Russian websites, an airport in Ukraine and part of the underground transport of the Ukrainian capital, Kiev.

According to statements by Ilya Sachkov, head of the Russian cybersecurity company Grupo-IB: “In one of the companies, the work has been completely paralyzed. Servers and workstations are encrypted.” 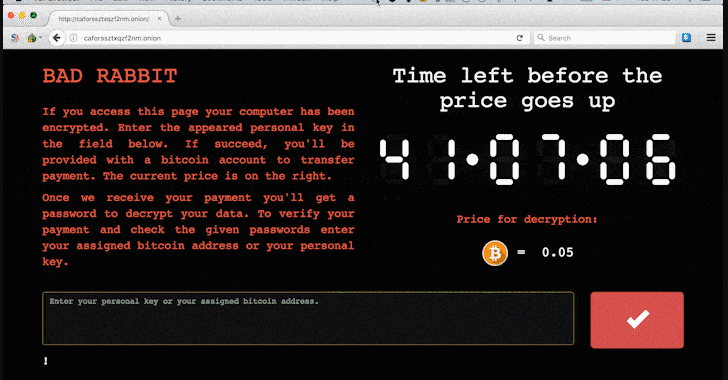 As with the rest of the rescue attacks, Bad Rabbit encrypts the files on the infected computers and, thanks to data obtained from the British media The Independent, we know that the amount that is being requested is 0.05 bitcoins, at the exchange $282.

Given how current technology serves as the basis for the unwanted access of anonymous hackers and even government entities, it seems appropriate to remind you of some of the problems you may face as a private individual and facing large companies. For example, the existence of Trojans is one of the current headaches in the banking sector because of the possibility of compromising the data and current accounts of its clients.

The espionage methods used by the NSA are already in the public domain. As well explained in a BBC article, this is also done in a completely legal way and covered by a Law of 2008 that in its article 702 exposes the right of access and storage of private conversations of US citizens in relation to objectives foreign.

Even in the last weeks, we have been able to know how it was possible, with the necessary knowledge, to be able to access those router with the WPA2 security system, being close to it. The implications were very worrying since any device that was connected to one of these infected routers was susceptible to be monitored, with the consequent exposure of data such as account numbers, passwords or simply personal images stored in our devices.

It appears that the virus is spreading to other countries in Europe, according to TechCrunch, such as Turkey and Germany. So, what do you thin about this? Simply share your views and thoughts in the comment section below.