We all know very well that the Chinese smartphone manufacturer Xiaomi is working hard once again simply to bolster its Redmi line of low-budget Android smartphones, and this time we must prepare for the Xiaomi Redmi 5A model whose official images, specs and price leaked.

Xiaomi is working hard once again to bolster its Redmi line of low-budget Android phones, and this time we must prepare for the Xiaomi Redmi 5A model, which on the weekend looked like the FCC (Prime version) and now returns to filtering themselves into new images with decent specifications and an unbeatable price.

A filtered rendering device already had previously and basically reveals everything in terms of smartphone design. The important thing, however, is not the appearances, but the specifications and, obviously, the supposed price of the next model.

It will be available in several colors, including black, white, silver, gray, pink gold, gold, blue, red and pink, but inside it will be powered by Qualcomm’s Snapdragon 425 chipset, with 2GB/3GB RAM and 16GB/32GB storage capacities. On the front, as shown by the following render of the Xiaomi Redmi 5A we would find a 5MP camera, while on the rear it would host an 8MP main camera. All this on a device running Android 7.1.1 with MIUI 9 as the personalization layer. 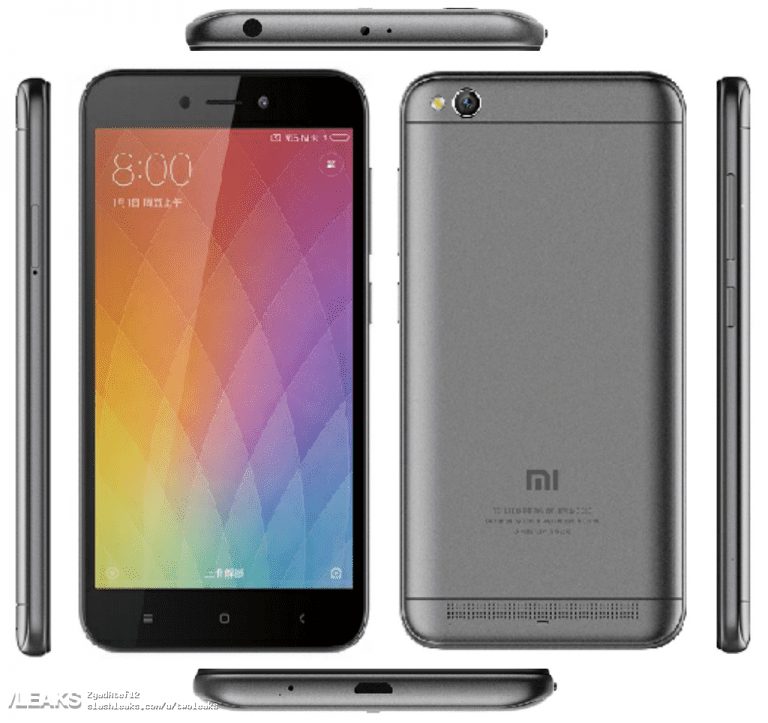 More details of the Xiaomi Redmi 5A

Unfortunately, the device will dispense with the classic fingerprint sensor, one of the aspects cut out in order to try to reduce manufacturing costs to the maximum. Instead, users will benefit from a 3000 mAh battery that would keep the smartphone on for almost 2 days.

This model would receive a Prime version that as we said at the beginning has already been through the FCC. It would integrate an even larger screen than the usual 5.5 inches that are mounted earlier versions of the Redmi range. Regarding the processor, it would be a Snapdragon 435, one of the most popular processors in the input range, accompanied by a 4GB of RAM while internal storage would reach 64GB and it will be expandable by microSD cards.