The past year 2017 has been the year we were waiting for at the level of design of smartphones, the main manufacturers – with some exceptions – have gone to work to optimize the percentage of the screen on the front, and there is more to see the Samsung Galaxy S8 and the iPhone X to check it. They are the maximum exponents in terms of design in Android and iOS, and it shows.

Faced with the symmetrical and borderless design of the Galaxy S8, the iPhone X proposal is based on a terminal with an invaluable edge that covers the entire front, except at the top. Yes, the notch that has received so much criticism. And now precisely, the South Korean giant Samsung has filed a patent that would make it possible to include a screen on a smartphone that would occupy absolutely the entire front of the smartphone.

If there is something to be acknowledged to the Korean company is its brutal capacity for innovation, we not only see it in the world of telephony, but also in all kinds of products marketed by the firm. It has a privileged position, and this is the main reason.

Now, as you can read in iDropNews, a Samsung patent has come to light that would eliminate the need to introduce this ugly notch. This would consist of a perforated screen, thanks to which the proximity sensors, the loudspeaker and the front camera could be introduced in the same place, but without the need to have a frame around it. Simply next to the screen. 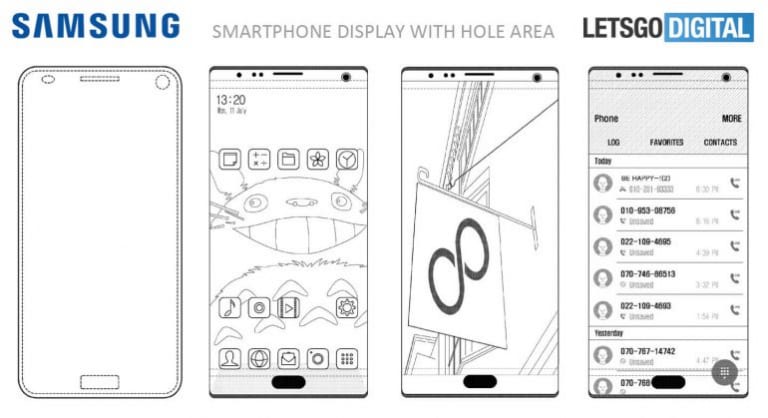 As a concept, it seems to us something absolutely brilliant on the part of Samsung, however, we also think that this type of screen would increase the price, while a small frame like the one we found in the MIX for the speaker, or a relatively small bottom frame maybe it would be something simpler and that, when the truth is, it would fix the notch problem of the iPhone X or the Essential Phone.