Regarding foldable designs, Samsung probably has the most patents filed among all the smartphone makers, but only a few of those patents get used for mass-produced models.

We have seen quite a few strange designs in the past few years, but the latest foldable patent is certainly one of the wildest ones so far. It is called “Galaxy Z Flip & Slide” and appears to be combining the Flip design with a sliding mechanism that allows for an extra-large display and some interesting new use cases.

The unique folding and sliding screen can be set up in an upright position with the middle folding screen parts magnetically fused, allowing the device to act as if two Z Flip phones would be placed one against each other. 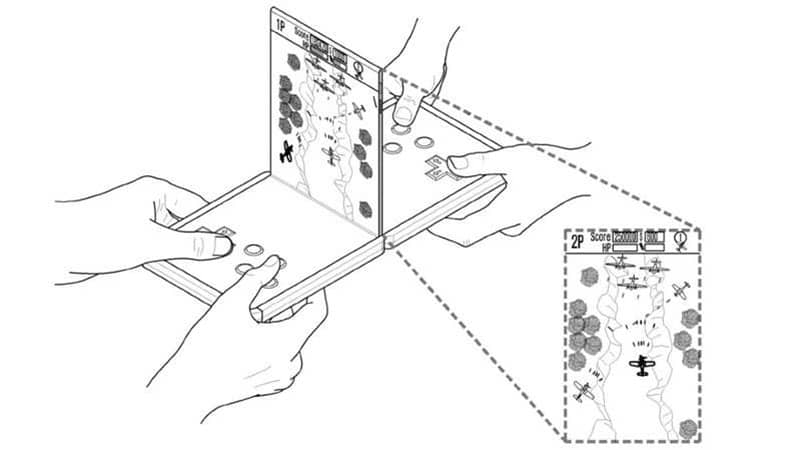 Two users can thus play multiplayer games on the same device, and the lower screen parts can provide virtual game buttons. Additionally, users may only slide just a small part of the screen in compact form to check the time, messages, and key stats.

It reminds, what resembles a transformer robot that starts as a regular vehicle and ultimately converts into a towering guardian, as its initial compact form is no larger than the current Z Flip 3 model. Yet, users can increase the unfolded screen estate by 100% with the aid of a sliding mechanism.

As per the images provided in the patent documentation, the display appears to have a punch-hole selfie cam, while the main cameras are placed on the back of the upper half. Keep in mind that this design may never hit the consumer market, and if it does, it will probably happen in at least a few years.

Until then, we are looking forward to seeing what Samsung can bring to the table with the Z Fold 4 and Z Flip 4 models in August, and maybe we could see Samsung’s first slidable design launched later this year, as well.