[dropcap]I[/dropcap]f you are using a Android powered smartphone for a long time, then you must be bored watching the same style of font every time. The default font for Android is pretty good and easier to read things but if you really think that you guys need change then its time to change. In some android devices like Samsung device there are inbuilt feature to change the font of device. but this only set a single font everywhere. But what if you set set a different font for each app in your android. Yes this is possible, you can do this with the guide that we are going to discuss right here. This will be very cool having cool fonts in different apps. So have a look on complete guide discussed below to proceed.

Also Read: How To Customize Google Play Music In Android

How To Set A Different Font For Each Android App

The method is quite simple and just need a rooted android device that will allow Xposed installer to run on device. And after having Xposed installer you will be using a Xposed module app to set a different font for each android app in your device. For this follow the guide below.

Also Read: How to Change Fonts On Android (With or Without Root)

Steps To Set A Different Font For Each Android App:

3. Now after installing the Xposed module you need a cool Xposed module that will allow you to have different font on every app in your android and the module PerAppFonts is helpful.

4.  Now install the app and then in Xposed module this app and after that you need to reboot your android device for the proper working of the module in your device.

5. After reboot launch the app you will see all the apps currently installed on your device. 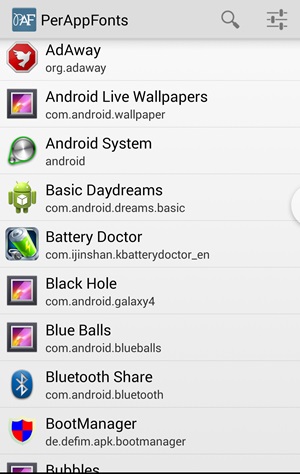 6. Tap on the app whose font you want to change and then enable the font changing option and then select the font from the location mention there and if you want to add more fonts then you can also download any of your favorite font online. 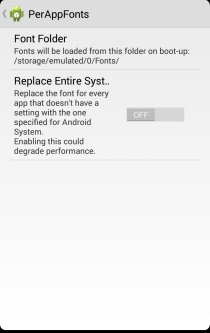 7. Thats it you are done, now the app’s font will be changed.

So above is all about How To Set A Different Font For Each Android App. With this you can easily change font of any apps according to your wish using the cool module that we had discussed in this guide. Hope you like this, keep on sharing. Leave a comment if you have any related queries.