[dropcap]Facebook[/dropcap] made it clear that it continues taking seriously the idea of providing Internet access to the maximum possible places. The company develops various designs for this purpose, as the gigantic drone Aquila. But one of which were detailed in the event’s Facebook Terragraph, which aims to create a high-speed wireless network to connect cities.

Facebook has been testing the technology for some time on its campus in California. There, the company has managed to achieve data transmission speeds exceeding 1 Gb/s (gigabit per second). The current plan is to test the transmissions in the central city of San Jose,California and then do the same in other parts of the world. 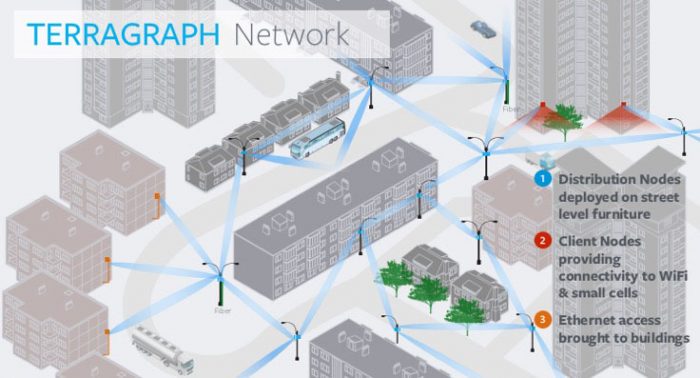 What is the secret of Terragraph for such high speeds? Well, the project is based on a wireless technology supported by several industry giants like Samsung, Intel, Sony, and Qualcomm: WiGig.

Relatively new, this pattern can allow connections with speeds up to 7 Gb/s. Such high rates are possible, among other factors, due to the frequency of 60 GHz WiGig. In contrast, this frequency has a serious limitation: it is easily susceptible to blocking by obstacles – it’s very difficult to make the signal through walls, for example.

To overcome this problem, Facebook wants to combine the WiGig other ideas. One is the integration of technology with a network management software developed by Facebook and able to distribute the smart way data traffic to avoid overload or bottlenecks.

Another plan is the distribution of multiple antennas or small signal transmission points across the city. As they can stay in lampposts and traffic lights, for example. The purpose is to leave the antennas in close proximity to each other, with the distances between 200 and 250 meters, the maximum distance supported by WiGig.

Facebook did not detail how the signal provided by the network may be taken to the interior of buildings and homes, but this does not seem to be a difficult problem to solve: we can think of receivers connected by cable to the router to an internal Wi-Fi network.

Difficulty even Facebook will have to decrease the risk of instability in the transmissions. Trucks, buses and even large clumps of cars can interfere with the signal. Ben Zhao, networks reaching expert at the University of California, explained to the MIT Technology Review that the antennas have to “crawl” very precisely the devices connected to that type of problems do not occur.

If we consider the dynamics that urban centers have, this is a big challenge, but the smart antennas distribution should help with this. Anyway, the next rounds of testing will tell if Facebook will succeed with Terragraph. It is the company’s intentions to monetize this technology, not directly.

If the project is successful, the Terragraph must be licensed for free to suppliers and other companies in the industry. By making viable high-speed networks, Facebook can bring more people to their services or even expand its segments, as the company is very focused on virtual reality. Even rural areas are being considered.

Another connectivity project that Facebook addressed the F8 is the ARIES (Antenna Radio Integration for Efficiency in Spectrum) technology, which promises to take broadcasts from urban areas to surrounding points that are at a distance of up to 40 kilometers.

In short, Project ARIES is a broadcast platform that, at this stage, works with 96 antennas to increase by up to ten times the energy and spectral efficiency of conventional 4G networks. This is also a very challenging initiative, after all, all the work is being done with a focus on a very ambitious goal: ARIES have to work without, however, require large expenditures with its implementation.