Whatsapp is already facing issues after it brought data and Privacy policy update news. However, this time the Whatsapp Web app users’ mobile numbers are leaked on Google Search. Usually, Whatsapp is a mobile app, but millions of people use it on desktop as well for their professional use.

Many Whatsapp Web Users Mobile Numbers are on Google Search 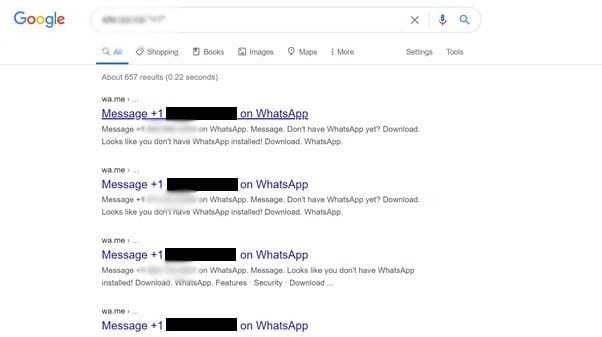 The researcher has shared the picture with IANS and told,

Earlier this week, private group chat links were available on Google Search, to which WhatsApp said, it has asked to google not to list such chats on Google search. And has also warned the users not to share links that can be accessible publicly on websites.

The links which were indexed by Google were of a private chat group, which means anyone can join any private chat group by just searching it. However, now the Whatsapp group chat links are removed. And now Google has indexed Mobile numbers of Whatsapp Web users.

“Despite WhatsApp advising users and telling Google to remove the earlier exposed group chat links, the mobile numbers via WhatsApp Web application are now being indexed on Google Search”.

The spokesperson of the company said,

“We have given our feedback to Google to not index these chats. Links that users wish to share privately with people they know and trust should not be posted on a publicly accessible website”.

Issues with Whatsapp came up last year in February when Google had results around 470,000 for a search of “chat.whatsapp.com”. This issue was found by Jane Wong who is an app reverse-engineer.

However, as per the reports, the personal mobile numbers of Whatsapp Web users is done by Whatsapp or Google, which is still not known.