Finally, Whatsapp has rolled out the support for pausing voice recording after doing several tests. Earlier, Whatsapp unveiled the voice message preview feature that lets users to listen to the message before sending them.

Along with the Voice message preview feature, the instant messaging app has also got a new Focus Mode. However, these features are now available for iOS users only.

The new features are currently available to selected iPhone users; in the coming weeks, they will roll out to all the users.

Now You Can Preview Voice Recording Before Sending on WhatsApp 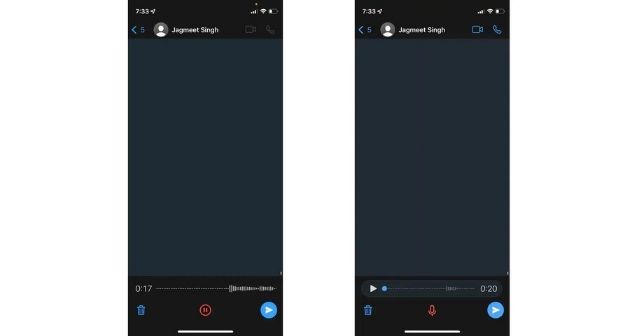 So, whenever you send a voice message to anyone, now you can preview it before sending it. The new pause voice recording feature is available on Whatsapp iOS version 22.7.75.

To get this feature, you must have the latest Whatsapp version on your iOS device. Still, if you don’t get it, then wait for a few days.

“You can now pause and resume while recording voice messages. Try it out by swiping up to lock a recording, and then tap the “pause” and “resume” buttons.”

How to Use the Pause Voice Recording Feature on Whatsapp?

If you want to try the new Whatsapp voice message feature, you need to swipe up and lock your voice recording. Then it shows pause and resume buttons with which you can check out the recording.

This voice message feature was first spotted in October. The feature is available for iPhone users and will soon roll out for Android users.

Apart from pause Voice recording, iPhone users also got support for the new Focus Mode. This mode lets the users receive messages from selected contacts only.

Once you turn on Focus Mode, you will get messages from only selected contacts. The feature comes with iOS 15; you update your iPhone to the latest OS to get the new feature.