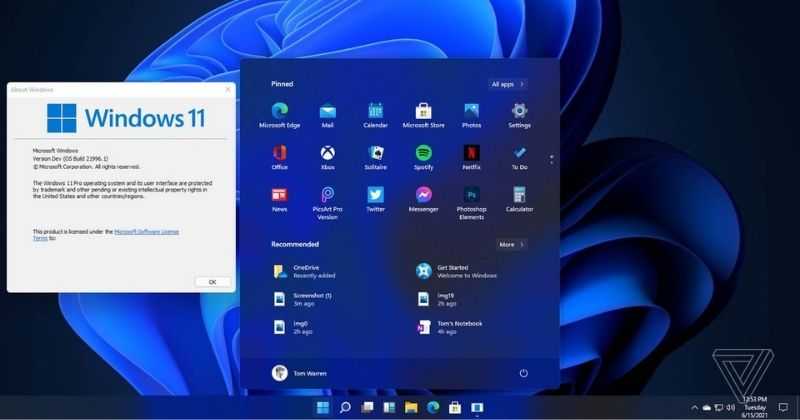 There is a launch event on 24 June where Microsoft will make huge announcements and the upcoming new Operating System Windows 11.

However, before the release, some details of Windows 11 has been leaked online.

According to the leaked images of the new Windows 11 OS, we can say it looks much similar to Windows 10X. However, Windows 11 will have a new User Interface and a Start Menu with rounded corners, and much more.

Contents show
Windows 11 is Much Similar to Windows 10X
Download and Install Windows 11:

Windows 11 is Much Similar to Windows 10X

A Chinese site Baidu was the first to publish the screenshots, and then the while, OS has appeared online.

The start menu and the user interface look like Windows 10X. However, one of the biggest changes is found in the taskbar. Here, all the app icons are kept in the center, and the tray area is cleaned.

Microsoft is mostly bringing over the Windows 10X shell on top of Windows 10 and naming it Windows 11. Even the Windows logo is new with a blue Microsoft logo. However, it has replaced the logo with a flattened square.

The updated Start menu is a simple version of Windows 10. It has pinned apps, recent files, and it can quickly shut down or restart Windows 11 devices. It is very simple to the current ones in Windows 10.

Additionally, you can move the app icons and start menu from the center to the left-hand side; there is an option to change it. Even the dark mode is available, and Windows 11 looks like a refined version of Windows 10 instead of something new.

In the new update, Microsoft is using rounded corners for the Start menu as well. However, remember that this is still an early version of the new OS from the leaked details, so this is not confirmed yet.

There will be more changes within Windows 11; at present, not all changes have appeared. We expect the beta version to arrive soon for the Windows Insiders. It is said that Microsoft is bringing Windows Widgets back, and we can see some labeled widgets in the OS. However, the widgets are not loading now, but they are designed to give quick access to news, weather, and other web content.

Microsoft did not bring its Windows 10X OS, and the company is reusing it with Windows 11.