Windows 11 is getting a new sound recorder app. Microsoft has announced the new app for Insiders in the Dev Channel.

Like other apps, including Paint, Notepad, and Clock, Microsoft has updated the new Sound Recorder app. The app features an all-new design and features.

There are some precise changes to the user experience. While playing back a recording, the new users will see a visualization of audio levels. It is easier to find a specific point in the recording. 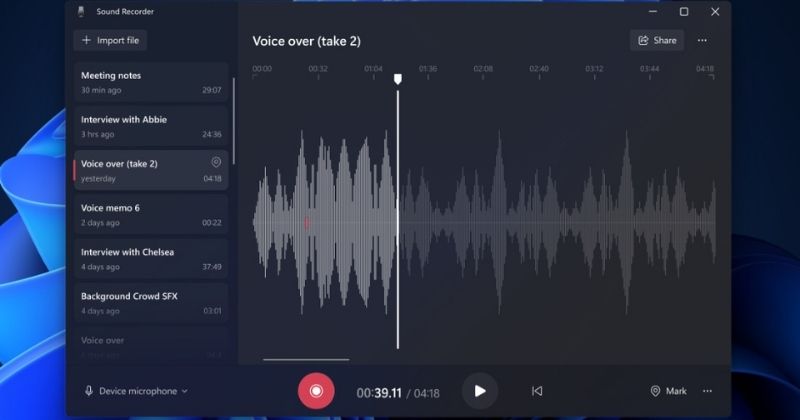 The new Sound Recorder app has a new markers feature. It lets you mark specific timestamps in the recording to refer it back later.

Also, you can now import audio files and can change the microphone device from the app itself. Moreover, you can also change the output file type of the recordings that are saved.

“You’ll notice that there is a beautiful new visualization for audio during recording and playback to complement the new look and feel of the app. We’ve also added support for changing your recording device and file format from within the app, which was among the top requested features in Feedback Hub.”

Apart from this, a few small changes are done, like some of the options and controls are moved around, so there is no command bar at the bottom of the app with everything.

The Share button is at the top, and the ability to add a marker to the recording is at the bottom. Also, you can import files to Sound Recorder instead of just seeing the generated files by the app.

However, the new Sound Recorder app is only available to Windows Insider in Dev Channel. So, if you want to try it, you need to be an Insider. In the next few weeks, the app will be rolled out to other channels.

There are multiple other apps that are redesigned. Apps like Paint, Notepad, Photos, Snipping tool, Media Player, Clock, Calculator, and now the Sound Recorder app.