We all know very well that light is the fastest thing in the universe, so trying to capture its motion is a big challenge. But, what if I say you all that now you can do so? Yes, there is a technology capable of doing so. Yes, today in this article we will show you the world’s fastest camera that freezes time and light at 10 trillion FPS (Frames Per Second) and sees light in slow motion.

Light is the fastest thing in the universe, so trying to capture its motion is a big challenge. But, what if I say you all that now you can do so? Yes, there is a technology capable of doing so.

Scientists at Caltech have created a probe that drops image capture to a staggering 10 billion frames per second, which means it can pick up the light as it advances – and they have plans to make this camera one hundred times faster.

Understanding how light moves is a fundamental exercise for many areas, not just to satisfy hollow curiosity with no clear goals for human development. They are well-informed motivations that drive the efforts of Jinyang Liang and his colleagues.

There are potential applications in physics, engineering, and medicine that rely heavily on the behavior of light on scales so small and so short that they are at the limit of what can be measured.

Probably you know the term “frames per second” (fps), even more, and more talk about cameras in smartphones, you may have heard of cameras capable of capturing millions and billions of fps. In fact, there is a “fight” between some entities to see who does more and more seriously in this area.

The most powerful slow-motion camera on a smartphone belongs to Sony with its 960 fps. This number may seem unrealistic when we have 120 fps available on good day-to-day devices. Of course, this number is to hit and for this, there is still something more fantastic presented by the hand of Caltech: 10 000 000 000 000 frames per second. This camera is so powerful that it captures the faster movement of the Universe, a ray of light.

Within the fight, we mentioned above is the achievement of a record that was previously at 5 billion fps. With this new system, the number is doubled to 10 billion fps. But those responsible for the project expected to reach 100 billion fps because it is a scalable system.

Slow-motion of the fastest thing in the Universe

As you would imagine, the entire structure of the chamber occupies a large space, in fact, it occupies an entire room. In truth, we can not say that it is a camera as we imagine it to be, it is a set of multiple cameras managed and synchronized by computational algorithms of photography.

More specifically, the system consists of an ultra-compressed camera (receiving 100 billion frames per second) and a static camera (which is what makes it reach 10 billion fps). The data from both chambers are processed using an algorithm to reconstruct the image at a super slow speed which is known as the T-CUP method. 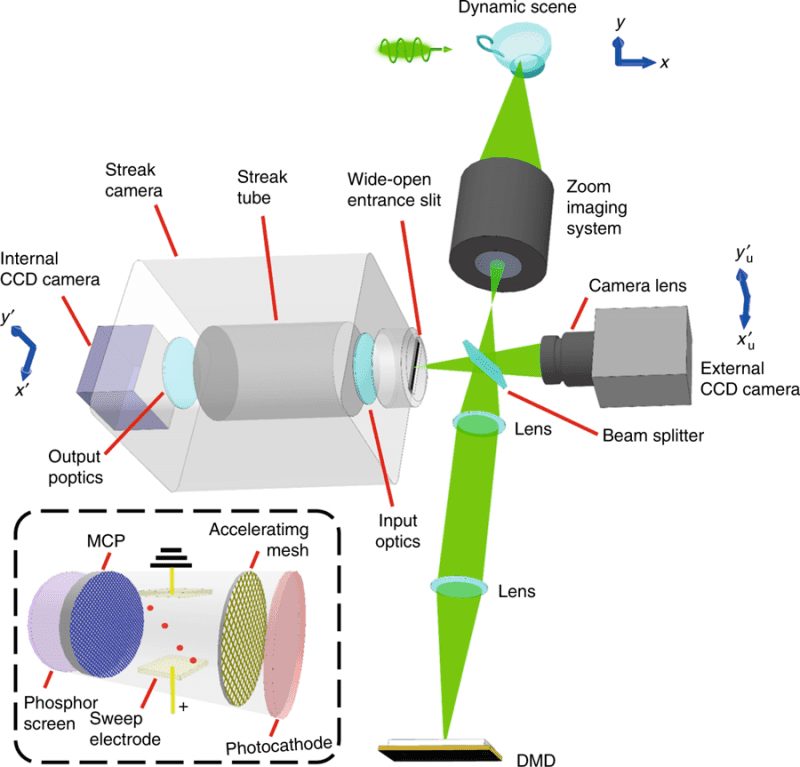 We are at a level where the “second” time measure does not correspond to the time requirements achieved in this project. The smaller scale that should be used requires femtoseconds. One femtosecond is 10−15 or 1/1,000,000,000,000,000 of a second. But the capture of femtoseconds is not the only difficulty for this new camera, because after capturing them it is necessary to store what was collected.

Currently, there is no storage array fast enough to write 10 billion times per second the data obtained. That’s why this new camera currently works only for 25 frames in a row. In the tests performed, it was possible to capture the light of a laser, allowing to observe how the photon interacts when it reaches the material.

This type of research still has a long way to go, however, once the technique is discovered, it remains to mature and have to evolve day by day in the various areas that have been referred to. Medicine and science are fields where it is important to perceive light very well. So, what do you think about this? Simply share all your views and thoughts in the comment section below.