This is also the first smartphone in the world to incorporate four rear cameras and is equipped with features designed to help any user to live every day to the fullest.

It was from Malaysia, at an event with the name “4X Fun“, that the South Korean giant Samsung presented recently, the new Samsung Galaxy A9. This smartphone was developed for those who know what they want. Whether it’s capturing a daring selfie or the perfect landscape, the new Galaxy A9 is the perfect companion to record and share the daily adventures wherever life takes you, as the South Korean giant Samsung reveals.

The new Samsung Galaxy A9 comes with 4 innovative rear cameras:-

The all-new Samsung Galaxy A9 makes it possible to record dynamic and vivid photos effortlessly. Thanks to its four lenses, you can learn additional ways to express your creativity, capture and create and share stunning images.

Get closer to what you want to shoot without compromising on quality with 2x Optical Zoom that creates detailed close-up photos even from long distances.

Capture the world at its fullest without limits with the Ultra Wide Angle Lens, and shoot like a pro thanks to the Scene Optimizer mode. With Scene Recognition, the camera has become intelligent, being able to identify the object and adjust the settings to try to get the perfect shot.

Unleash your creativity with the depth of lens that allows you to manually manage the depth of field of images and focus on the object, for photos with a professional look.

Capture clear, bright images in bright or low-light environments with the Galaxy A9’s 24MP main lens, which delivers quality photos at any time of the day.

Moreover, now if we talk about the front camera then let me clarify that the all-new Samsung Galaxy A9 comes with the huge 24MP camera with F2.0.

In addition to the four innovative rear cameras, this smartphone also features a 6.3-inch Full HD+ Super AMOLED display (maximum resolution of 1080 × 2220), with a 3800mAh battery and 6GB of RAM ( there is also a version with 8GB of RAM), and the operating system is Android 8.0 (Oreo). 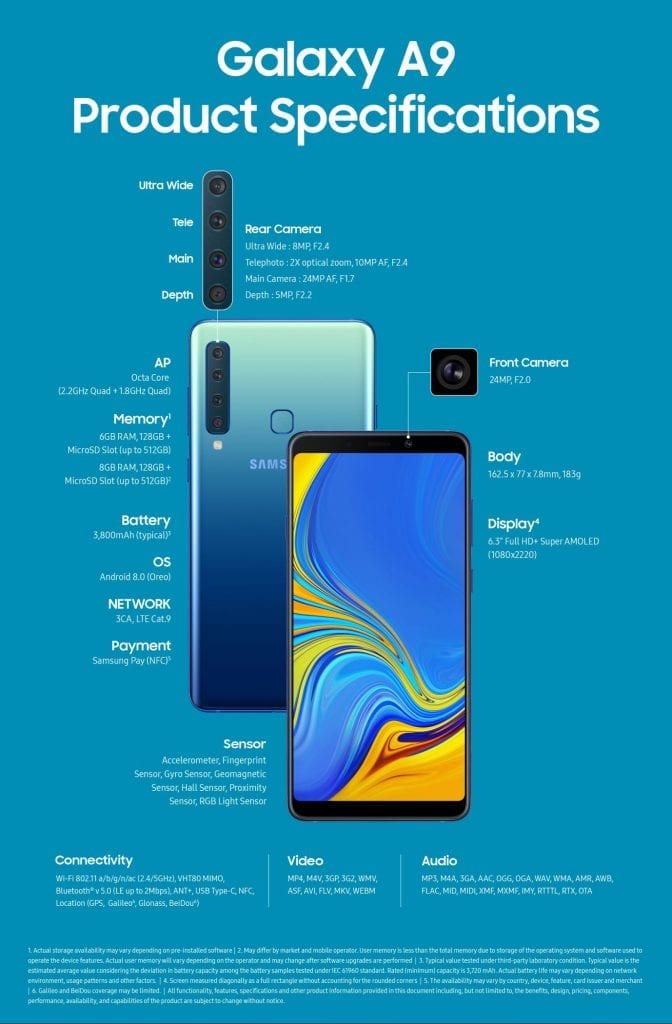 Created on the basis of the South Korean giant Samsung’s design heritage, the all-new Samsung Galaxy A9 is available in three unique colors: Caviar Black, Lemonade Blue, and Bubblegum Pink, with a sleek, ergonomic shape and curved 3D glass back for a comfortable touch of high quality, while if we talk about the price then this all-new Samsung Galaxy A9 will cost around $724. So, what do you think about this? Simply share all your views and thoughts in the comment section below.