The Xiaomi’s Redmi Go smartphone is the latest addition from the well-known Chinese smartphone manufacturer to its smartphone catalog. The all-new Redmi Go uses the lightest version of Android, of course, I am talking about the Android Go which is based on Android Oreo 8.1.

The all-new Xiaomi Redmi Go is basically designed to meet all our basic needs in a smartphone for smart work. However, it will also be present in Asian markets as well, with special importance on India. But, according to the latest reports, the well-known Chinese smartphone manufacturer Xiaomi decided to release this brand new Redmi Go smartphone in Europe first.

And not only that even it is the cheapest smartphone from the well-known Chinese smartphone manufacturer Xiaomi to reach Europe. So, Xiaomi with its brand new Redmi Go simply introduced itself as a direct rival to the Nokia 1.

While now if we talk about the features and design of the all-new Redmi Go then let me clarify that the all-new Redmi Go is totally built in polycarbonate plastic, also have a metal structure as well. Moreover, consumers can choose between Blue and Black color options for this smartphone.

The all-new Xiaomi Redmi Go also features a 5-inch HD screen in the traditional 16:9 format with a resolution of 720×1280 pixels. Inside this new smartphone from Xiaomi, of course, Redmi Go we will have the Snapdragon 425 processor from Qualcomm with a total number of 4 Cortex-A53 cores which has a clock speed of 1.4 GHz. 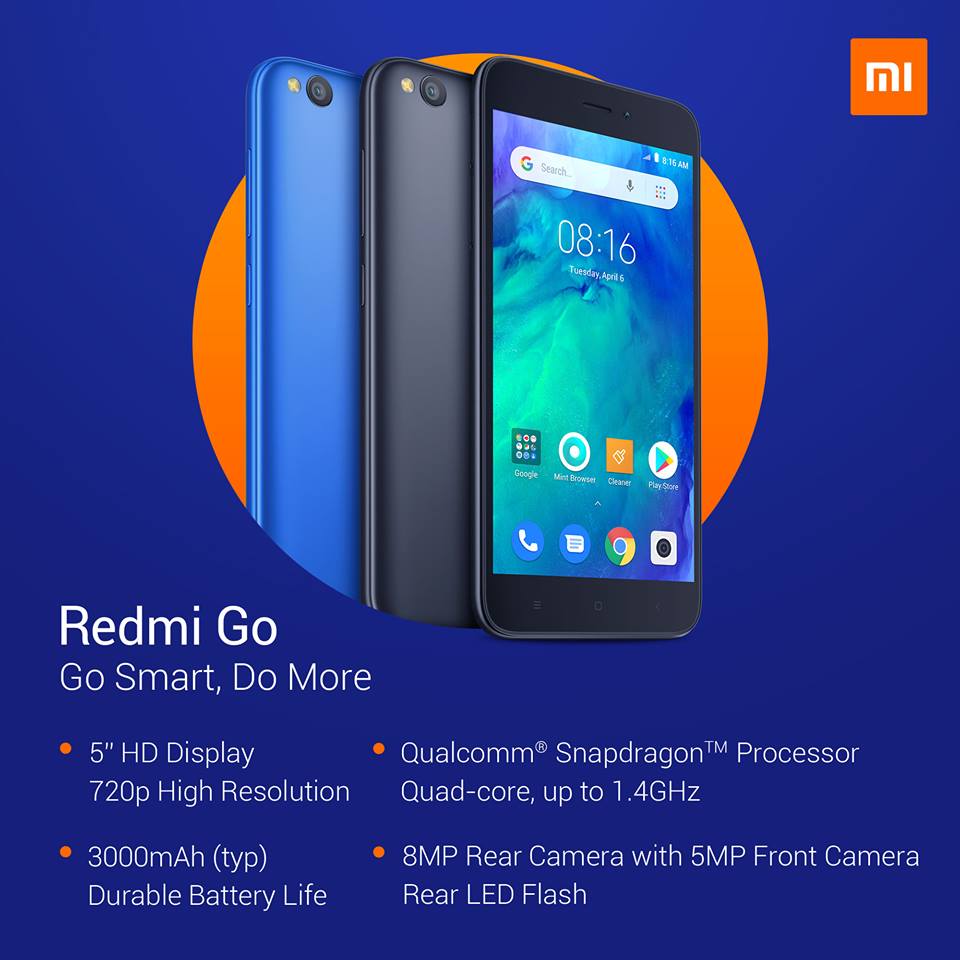 The processor uses a 64-bit architecture and 28nm lithography process and Adreno 308 graphics, as well as the Snapdragon X6 LTE modem. This component will ensure the Xiaomi Redmi Go access to Category 4 LTE networks. Yes, it means that the download speed of this device could simply reach up to 150mbps and 75mbps upload.

While the all-new Redmi Go features 1GB of RAM, 8GB of internal storage. However, if you want to expand the storage then you can also do so via its expandable storage which is expandable up to 128GB, through a microSD memory card.

On the camera segment, this all-new device features an 8-megapixel back camera with f/2.0 focal aperture which is accompanied by an LED flash. While on the front it features a 5MP camera for selfies and video calls with a focal aperture of f/2.2 aperture.

"GO" for something new! Today we're introducing the new #RedmiGo. RT if you'll be getting one #GoSmartDoMore pic.twitter.com/H9lPR9C5Sm

However, apart from all these things, the most interesting thing about this all-new Redmi Go is that it comes with a big battery of 3000mAh capacity and the new Redmi Go will be sold for $90 in Europe while for now, we don’t know when it will be launched in India and how much it will cost. So, what do you think about this? Simply share all your views and thoughts in the comment section below.