Recently, the well-known Chinese smartphone manufacturer, of course, Xiaomi announced the news of the new interface MIUI 10 for Android.

According to the information, this new interface is better organized and more optimized. Let’s get to know the news.

MIUI is a custom ROM that was initially created by a Chinese team. This ROM, now maintained by Xiaomi, offers a very stylish interface (iOS style), many innovative features and indications regarding fluidity are also very positive.

The main news from MIUI 10

According to what has been revealed, this new version, based on Android Oreo, has as its main focus the optimization and also some improvements at the interface level.

The new and innovative menu of recent applications 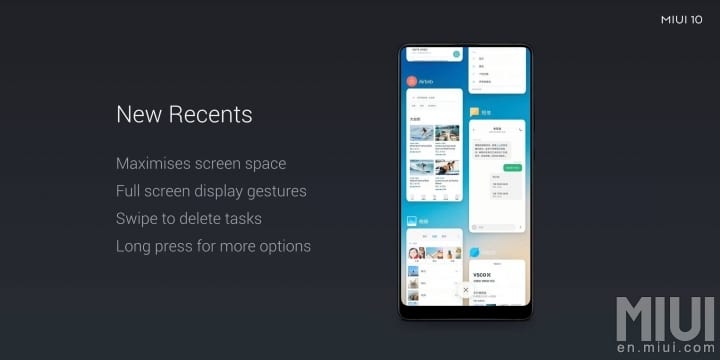 As you can see from the screenshot above, recently opened applications are available in two columns, filling the entire screen instead of the traditional cascading feature. By pressing longer on each “card”, the user can access the options or simply swipe to close the app.

According to what has been revealed, AI integration aims to eliminate loading times by studying user behaviour and anticipating which applications are run at certain times of the day.

The list of smartphones compatible with this feature will be revealed soon by Xiaomi. This new feature will work with both the main camera and the front camera

Better support for control of smart devices in the home. With just one click MUIU 10, it will be possible to easily control all the smart home gadgets of the Mi ecosystem.

When will it be available?

This information is only for the MIUI 10 China Developer ROM and not for the Global version. And these were the novelties presented by MIUI 10, the Chinese version. As for Global ROM (beta), Xiaomi said that soon there will be news, hence, simply stay tuned to know more.