[dropcap]W[/dropcap]e all know very well that the well-known and the most anticipated gaming smartphone of the famous Chinese smartphone manufacturer, of course, Xiaomi’s Pocophone F1 has become the sensation in the smartphone market just after its official announcement. Now according to the latest reports, the next version of Poco F1, of course, I am talking about Poco F2 Geekbench listing revealed its CPU and RAM.

The well-known Chinese smartphone manufacturer, of course, I am talking about none other than Xiaomi seems to be finalizing the second generation of its well-known sub-brand ‘Pocophone’, of course, the Xiaomi Poco F2.

As recently, for the first time, the all-new Poco F2 gaming smartphone has been seen in a well-known benchmark site. Hence, right now we can not know anything about its design and some other details, as it has appeared in a benchmarking site so, we can only know its technical specifications right now.

We all know very well that several months ago, the well-known Chinese smartphone manufacturer Xiaomi introduced the all-new Poco F1, a gaming smartphone with characteristics of a good flagship at a very reasonable price. Now, according to the latest reports, the well-known Chinese smartphone manufacturer Xiaomi to launch the second version of the Poco F1, of course, it will be none other than the Poco F2.

However, the good thing is that we told earlier, at the moment, we already know its first key specifications and we should thank to the fact that it has gone through a well-known benchmarking site, of course, Geekbench. 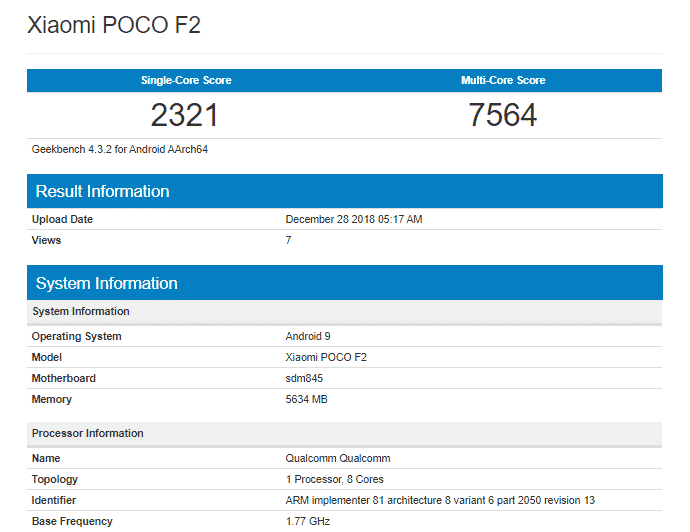 However, currently, we do not know that why Xiaomi has chosen the old Snapdragon 845 instead of choosing the all-new Snapdragon 855 which would have made sense for Xiaomi to launch the second generation of Poco F1. As with this specifications, the all-new Poco F2 remain similar in its basic technical specs sheet which will simply demote its position in competition list of 2019.

But, hold on, we all know that the specs are not so surprising, but still, we can’t speculate or confirm anything about the all-new Poco F2, as nothing is confirmed yet officially. So, what do you think about this? Simply share all your views and thoughts in the comment section below.