We all know very well that fashions in all areas of life change and the mobile phone market was not going to be left behind. New trends bet on full-screen smartphones with 18:9 aspect ratio and the minimum possible frames. Hence, Sony has decided to launch Xperia XZ Premium 2 with a 4K bezel-less display.

Fashions in all areas of life change and the mobile phone market was not going to be left behind. New trends bet on full-screen smartphones with 18:9 aspect ratio and the minimum possible frames.

Although several manufacturers have already made launches in this regard, now the Japanese multinational giant Sony seems to do so throughout the next year, introducing it in its new model Sony Xperia Premium and others that will come later.

Apparently, according to various reports that are echoing specialized media such as Gizmo China, the Japanese multinational giant Sony would already be fully prepared to present the successor of the Sony Xperia XZ Premium, and although we do not know all the technical characteristics that will bring, the suspicions point very bluntly that the screen would come without bezels.

This information would be added to the fact that the Japanese multinational giant Sony would be working on a redesign of its Xperia range for 2019, and now there is more information about this change in the designs of the devices. 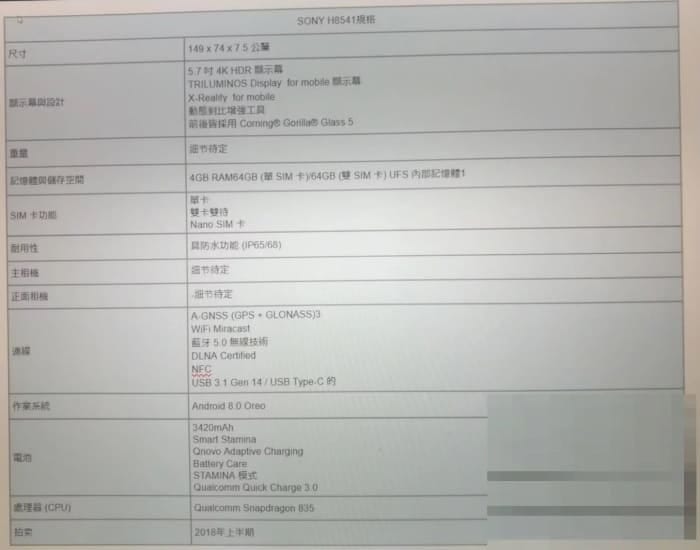 Features of the next Sony Xperia XZ Premium (2019)

The new device would bring a 4K HDR screen with 5.7-inch Triluminos technology, which would be protected with the Corning Gorilla Glass 5 system in the upper zone. The measures would be 149 x 74 x 7.5 mm, somewhat smaller than the 156 x 77 x 7.9 of the current Sony Xperia XZ Premium. The processor used would be a Snapdragon 835 accompanied by 4 GB of RAM and 64 GB of storage, with GPS + GLONASS connectivity, NFC and USB port type C, with resistance to dust and water.

Moreover, the operating system would be Android 8 Oreo, with a battery capacity of 3420 mAh and Quick Charge 3.0, a quick charging system which is developed by the giant chip maker Qualcomm.

2019 will be a year that will bring with it a wide catalog of mobile phones, and Sony seems to be one of the multinationals that will start to reveal new features, and that over the coming weeks we will see more presentations in this line that we just comment, and possibly after the Mobile World Congress of 2019 it will begin to gradually incorporate the Snapdragon 845 processors in its smartphones.