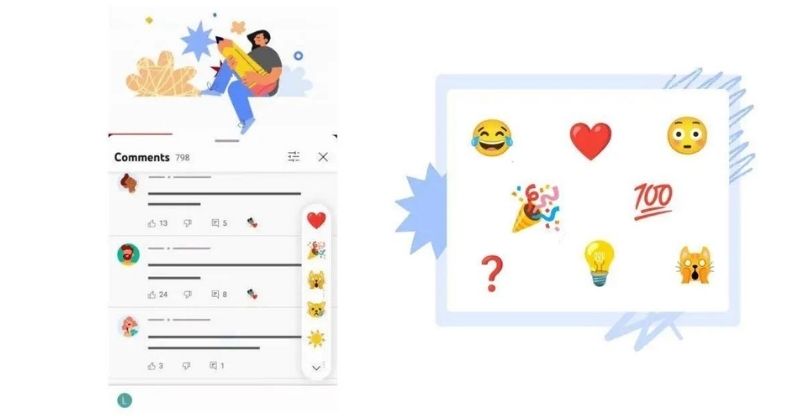 Youtube is testing a time reaction feature for the mobile app. This feature will let users react at a specific moment in the video.

According to Youtube, there will be eight emojis to react with. Currently, the feature is in testing, so it will undergo many changes at the time of development.

Since the time Youtube has removed disliked counts, it is testing other ways to interact with content.

The new timed reactions feature lets you post a reaction at any point in the video. You can open the comments section and click on the reaction panel. Also, you will see the moments that other viewers are reacting to.

On Monday, YouTube has announced the feature on support Google. As YouTube has received positive feedback about its timed comments in the beta feature.

The reactions will be seen at specific points on the video progress bar. Though we can see each reaction to the video, it will be anonymized as no one can know who has sent the emoji.

The new timed reactions feature experiment will begin with a small number of channels. Youtube has not revealed the list of channels or videos that will be part of the experiment.

The channels that are part of the experiment will get the reaction feature. Open the app and watch any video, then open the comment section and click on the reaction panel.

In the announcement, we can see timed reactions on the Youtube app on smartphones. However, the company has not specified whether it will be available on the desktop version or not.

The company will test multiple sets of reactions while adding or removing reactions. It is working on ways to improve interactions on the platform like the controversial removal of public dislike counts on videos.