We all know very well that every month the tech giant Google auscultates the universe of Android devices to see how the distribution of its most used mobile operating system is going on. However, now according to the latest reports, Android platform update shows that Android Oreo 8.0 usage more than doubling since May.

Google: Android Oreo 8.0 Usage More Than Doubling Since May

As it happens every month, the tech giant Google auscultates the universe of Android devices to see how the distribution of its most used mobile operating system is going on. It is normal to see older versions dominate this market, with newer ones having much smaller growths.

This month is not so different and the distribution of Android that rose the most was Oreo, which is now the 4th most used Andriod version.

Still with high levels of fragmentation, Android continues to be present in several different versions on the many devices that are in the hands of consumers. The latest versions would be expected to be the most used, but this is not the case.

Also read: How to Take Long Scrolling Screenshot on Any Android

The most prominent in this month of July is, without any doubt the Android Oreo. This version, which in February had just over 1%, is now in a solid 4th position, with an already expressive score count of 12.1%.

Even with this steady rise, Oreo is far from the most used version, which this quarter returns to be the Android Nougat, which claims for itself 30.8%. 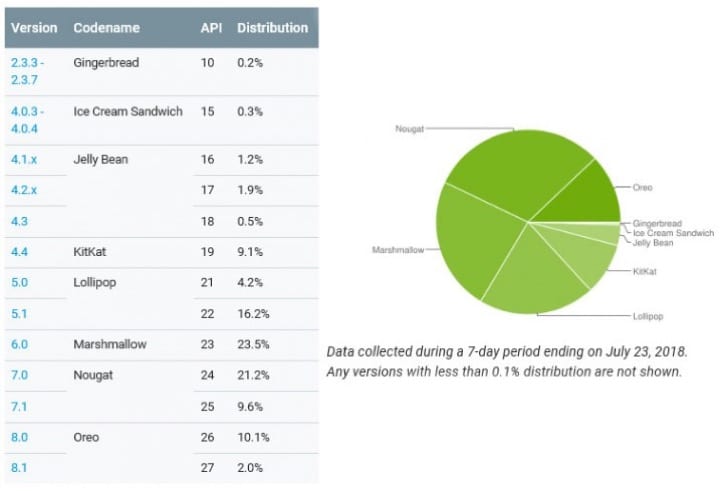 The second and third position of this Android ranking follows with Marshmallow, which still has 23.5%, and Android 5 Lollipop, which has 20.4% of market share. In the fourth, as mentioned before, is the Android Oreo.

At the extreme opposite, and almost to stop counting for these statistics, we have the older versions of Android. , of course, I am talking about the Android Gingerbread and Ice Cream Sandwich still have 0.1% and 0.2%.

Expected more of these new versions of Android, but it should be noted that the two latest versions claim 42.9% already. Until the arrival of Android P in a few months, it is expected that at least half of the Android devices in use have versions of this system released less than 2 years.