The Cupertino giant Apple is one of the companies that most seeks to defend its intellectual property and its patents. However, the same idea applies to its services and to its entire ecosystem. Recently, it silently bought a domain and shuts down a social network.

Apple Silently Bought This Domain And Shuts Down A Social Network

The tech giant Apple is one of the companies that most seeks to defend its intellectual property and its patents. The same idea applies to its services and its entire ecosystem.

So to avoid confusion with its iCloud service, it has now purchased the icloud.net domain as well, which is a social network that was available at this address.

There are several domains that the tech giant Apple holds related to its services. The idea is to ensure that these are not used by third parties to promote and cause confusion to users, while also preventing them from being used in social engineering schemes.

The company’s latest purchase in this area gave it access to the icloud.net domain, which belonged to a small Chinese social network. With the purchase of this domain, this same social network will be closed, not knowing if the tech giant Apple will keep the domain active.

For now, this domain only displays a message stating that users should delete their accounts and that the service will be discontinued by the end of February, and all user data will be destroyed on March 1, 2017. 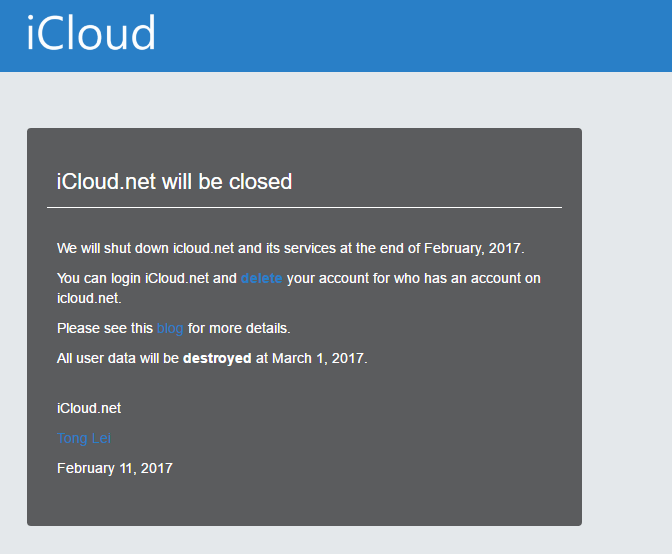 This is not a new situation for the tech giant Apple. The iCloud.com name and domain itself was purchased by the company in 2011. Its previous owner, the Swedish company Xcerion, which had launched its cloud service by that name in 2007, will have received $5.2 million. Xcerion later transferred over 170 domains to Apple, among them iCloud.us and iCloud.tv.

It is unclear how much the tech giant Apple will have paid for the icloud.net domain, but the value of this social network was not valued at a very high value, according to most evaluators available on the Internet.