We all know very well that the all-new Samsung Galaxy Fold will go on sale at around $1980, while the all-new Huawei Mate X will start at 2610 dollars. So, now just imagine once that how much a possible Foldable iPhone, of course, I am talking about the all-new iPhone X Fold will cost with this background.

The all-new Samsung Galaxy Fold will go on sale at around $1980, while the all-new Huawei Mate X will start at 2610 dollars. So, now just imagine that how much a possible Foldable iPhone will cost with this background.

However, the well-known media portal foldable news (a media dedicated exclusively to folding media) have already imagined how the new iPhone would look based on the rumors surrounding the device and a possible heritage of the design of the Samsung Galaxy Fold as in the Huawei Mate X.

It would be a device with a double screen. The exterior would fold on itself to reveal a more classic screen with a notch in the form of an eyebrow with 21:9 format screen like the recently introduced Sony Xperia 1.

The great novelty would be inside, since the possible Foldable iPhone would open to look like the size more similar to an iPad that could even be used in landscape mode to simulate a small MacBook, with the integrated keyboard. 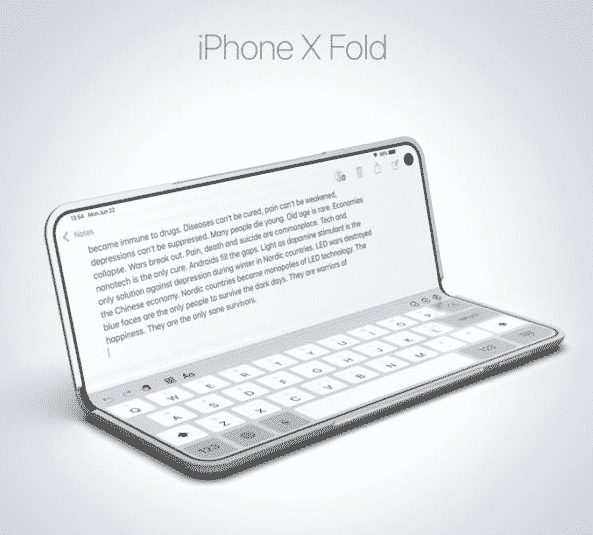 It seems that the concept designer has forgotten to add the Lightning port to the device as well as the headphone jack, but at least the classic iPhone power and volume buttons are still present. And not only that even there is no fingerprint sensor trace so Face ID would still be the technology to unlock the device.

However, the fact is that it is not yet confirmed that the tech giant Apple will launch a folding iPhone with these features. In fact, even the tech giant itself doesn’t want to throw themselves into the pool this year and launch a smartphone compatible with 5G networks.

But, it is clear that soon the tech giant Apple will launch a phone with a screen like this so-called iPhone X Fold, although we apprehend that the design of the device would not be as shown in these images. So, what do you think about this? Simply share all your views and thoughts in the comment section below.