Recently, we reported that regarding the use of social networks, the vice president of the social network giant Facebook, Chamath Palihapitiya reveals that “he does not use this ‘Sh*t’ and does not let his children use them as well.” Every citizen advises them to take a serious break in their use (not just Facebook, but of all).

The vice president of the social network giant Facebook, Chamath Palihapitiya also considers that the behaviours that users of social networks have are being programmed and warns that the “short-term effects of dopamine release, which is at the origin of cycles that are destroying the way society works.”

“Social networks are destroying society” as we told already that was the statement of Chamath Palihapitiya, an executive who worked on Facebook between 2007 and 2011 during an interview. Who has never had the feeling that, somehow, was “induced” to stay longer in the networks? That’s why the subject became controversial and forced Facebook to react. But the answer was somewhat surprising.

Today Palihapitiya is a co-founder and CEO of Social Capital, a company that funds startup projects in areas such as health and education. But the executive also sees himself as someone with a duty to raise awareness about the use of social networks. “I can not control (Facebook), but I can control my decision not to use this “Sh*t” as well as my children’s decision.”

However, after that, the social network giant Facebook respond to the criticism and said that “we are also making significant investments in people, technologies and processes, and – as Mark Zuckerberg said at the last investor conference – we are willing to reduce our profitability to ensure the right investments are made.”

Now to enhance the productivity and to stop the illiterate baits on Facebook, the social network giant Facebook announced its new guidelines. Starting this week, your Facebook news feed should get cleaner: as the social network has announced that it will lessen the relevance of publications that use engagement lures (ie, ask you to enjoy, comment or vote) to try to increase the reach.

When a post is fairly tanned or shared, Facebook’s algorithm understands that it is relevant and goes on to show it to more users. So some pages try to artificially inflate your engagements – for example, with phrases like “check your friends” or polls that ask you to vote with. 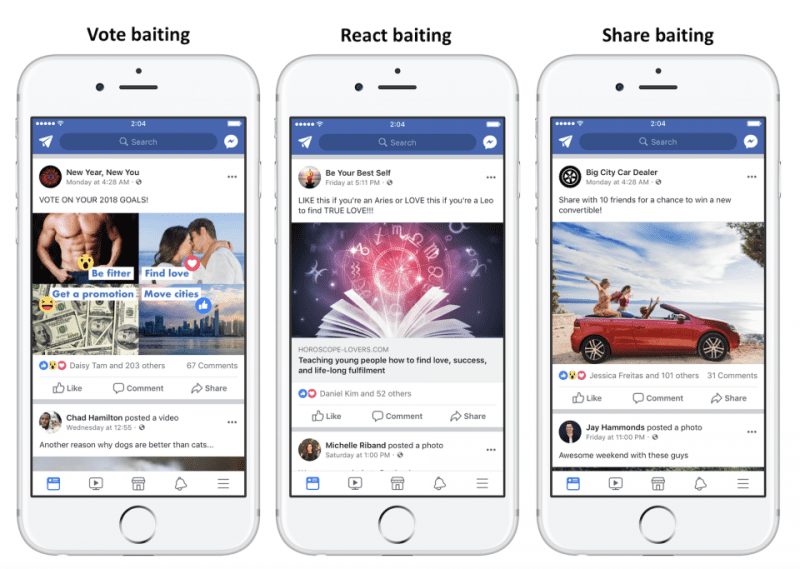 The social network giant Facebook says, “To help us promote more authentic engagement, Facebook teams have reviewed and categorized hundreds of thousands of posts to teach a machine-learning model to detect different types of engagement lures. Posts using this tactic will be shown less in the news feed.”

Moreover, the social network giant Facebook is also making some exceptions for posts that ask people for help, advice, or recommendations. Here are the types of exceptions that Facebook includes “circulating a missing child report, raising money for a cause, or asking for travel tips”.

In addition, pages that adopt engagement techniques will often have all of their publications displayed less relevant in the users’ news feed. The change will be applied “over the next few weeks” so that page managers adapt to the new algorithm.

There are only a few exceptions: posts asking for help, advice, or recommendations, such as finding a lost child, raising money for a cause, or asking for travel tips. These publications will not be affected as we already hinted earlier.