We all know very well that the big bet of the social network giant Facebook and its creator, Mark Zuckerberg, to overtake YouTube and take podium of the segment of televising contents through the streaming begins to cultivate. Hence, Facebook finally launched its Facebook Watch video service globally simply to rival YouTube.

The big bet of the social network giant Facebook and its creator, Mark Zuckerberg, to overtake YouTube and take podium of the segment of televising contents through the streaming begins to cultivate. In the United States, the Watch service has begun to be deployed, demonstrating a possible launch.

After several weeks of testing, the social network giant Facebook has begun to enable its streaming service for the broadcast of television content through its platforms in the United States. This new function comes with the mission to give battle to the great popes of the digital television content.

As we all know very well that the tech giant Google’s YouTube is arguably the largest and most popular Internet video platform. Without competitors to the height, the social network giant Facebook decided to attack this segment and announced last year the Watch as we told earlier.

After being available only to US users, the social network giant Facebook’s Facebook Watch is now available anywhere in the world – giving access to now everyone, wherever they are, the ability to discover videos and interact with friends, authors, and other fans.

It’s called Watch and it’s the new video platform that integrates the social network giant Facebook and will be a true rival of YouTube. After a year only available to US users, Facebook Watch is going to be available worldwide from today.

According to data from the social network giant Facebook itself, more than 50 million people (each) in the US watch at least one minute of Watch videos – and the total time spent watching video has increased 14 times since the beginning of 2019. 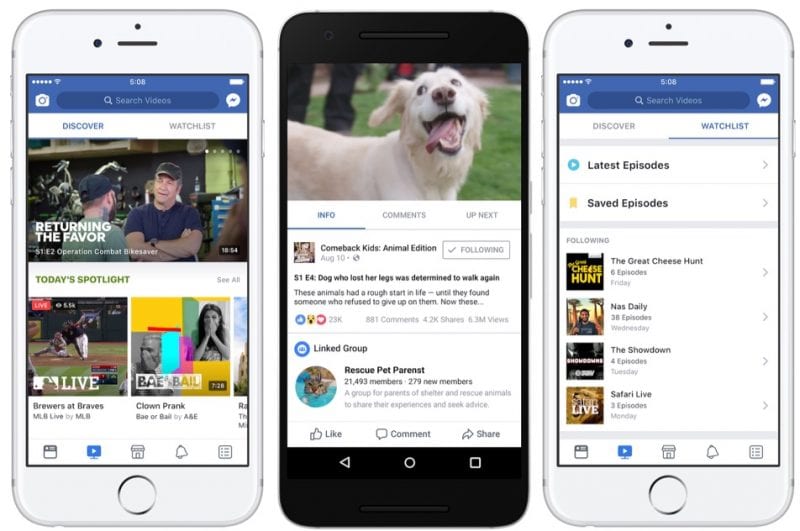 A place to discover new videos: you can discover the latest in entertainment, sports, news and more – all in the custom Watch feed.

A way to contact authors and editors you like: At the beginning of the Watch feed each user has his/her Watchlist, a collection of recent videos from the Pages that follow. You can customize this section by following more Pages or removing some from the list.

A place to store videos: When you come across a video in your Newsfeed, but do not have the time to see it right away, you can save it and watch it later on Watch.

Videos you can participate in: the social network giant Facebook is developing new people-centered video experiences, giving them the ability to decide on their content. Over time, users will be able to access new video experiences in their Watch feed, such as Watch Parties, Premieres, and videos focused on audience participation – such as the new trivia gaming program, Confetti. It will be increasingly easy to find live videos, so you can participate and discuss important moments as they occur.

Making Global Watch synonymous with new opportunities for authors and publishers around the world. The social network giant Facebook is expanding its Ad Breaks program so more partners can earn money from their videos, as well as giving new tips, tools and best practices for Pages in Creator Studio.