Microsoft’s next OS, Windows 11, is all set to roll out later this year officially. However, the preview build is available for download to check the features of the operating system. Before the stable release, the scammers have already taken advantage and are spreading malware.

Hundreds of users have already downloaded the Windows 11 installers and are infected with malware. All these users have installed the installers from unofficial sources, according to Kaspersky security researchers. 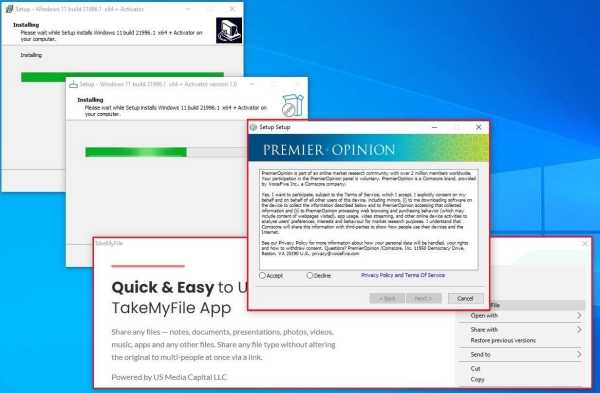 According to the reports by Kaspersky, fake Windows 11 installers are doing rounds that are delivering adware malware. The hackers are offering Windows 11 installer links and promising them to be a Microsoft Insider testing ring that can access the upcoming OS.

“Although Microsoft has made the process of downloading and installing Windows 11 from its official website fairly straightforward, many still visit other sources to download the software, which often contains unadvertised goodies from cybercriminals (and isn’t necessarily Windows 11 at all)”.

There is one malicious file called 86307_windows 11 build 21996.1 x64 + activator.exe. According to this file name, one can guess that it has Windows 11 build, and there is something that will automatically activate Windows for you.

The file is 1.75GB, and it looks like a normal installer, and there is a second installer that calls a download manager. If you accept the agreement, then you will get a bunch of malware.

This is just one example; there are so many other files available. Windows 11 is available for testing on the Dev channel, and it is malware-free. Microsoft has bumped up the system requirements for Windows 11, like Intel eighth-gen or AMD Zen 2 processor or newer. Because of this, the old PC users are looking for alternatives to install Windows 11 and are ending up with malware.

Malware can be from adware to a Trojan virus. Adware is not dangerous; it just injects your PC with advertisements. But viruses can create more issues, and they can be difficult to remove from the machine.

So, all those who want to download Windows 11 get it from the official sources only. Just wait for a while for the ISO files; Microsoft will make them available soon.