We all know very well that recently, the tech giant Google launched its new flagship smartphones, of course, Google Pixel 2 and the Google Pixel 2 XL.

As always, after a major release, the iFixit decided to disassemble the tech giant Google’s Pixel 2 XL to find out what is inside: an inactive processor, some standardized screws, and relatively easy to maintain.

The opening is made from the front. Typically, a waterproof smartphone has a shell filled with glue to protect the device’s components better, requiring applying heat to the product to open it.

But the South Korean giant LG decided to use an adhesive foam that lacks concrete tools, which is good!

After opening the Pixel 2 XL, experts from iFixit saw a magnesium alloy protection and below it the components: a 3520 mAh battery from LG, Pixel Imprint fingerprint sensor, and various chips, such as a 4 GB LPDDR4 memory from the South Korean giant Samsung, an octa-core Snapdragon 835 processor and a 64GB flash memory, which is also manufactured by the South Korean giant Samsung. 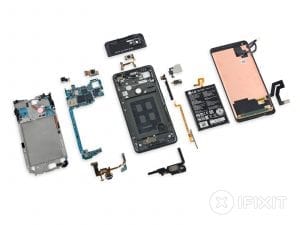 The most interesting chip is unobtrusive, showing only the SR3HX X726C502 code. Pixel Visual Core, the tech giant Google’s mobile chip that processes HDR+ images up to five times faster and consumes 1/10 of the energy of the Snapdragon 835 SoC.

However, the processor is inactive for now: it will be enabled with the latest update of Android 8.1 Oreo when third-party applications can use the Pixel 2 HDR+ algorithm.

A novelty of the Pixel 2 XL is the pressure sensor, which detects when you “squeeze” the device’s sides to activate the tech giant Google’s Personal Assistant, of course, Google Assistant.

iFixit says that it works using a pair of sensors connected to voltage meters that modify their resistances when they are “deformed”; this causes the software to detect the pressures.

On the positive side, the fact that many components are modular and the bolts are standardized facilitates maintenance; however, the battery is harder to remove. The display cable is tighter, increasing labor time.

So, what do you think about this? Share your views and thoughts in the comment section below.