Contents show
OMG! Google Sued For Tracking Location History Of Users With Location Turned Off
Google has changed the information given to users

OMG! Google Sued For Tracking Location History Of Users With Location Turned Off

With surprise, many users discovered this week that the tech giant Google, contrary to what it advertised, was collecting users’ locations even when they stated that they wanted to remain anonymous.

Contrary to what most users expected, it was discovered this week that the tech giant Google continues to track the location of users even if they turn off Location History in the management zone of their account.

The finding was revealed by the Associated Press (AP), which showed that this data continued to be recorded and used to present users with targeted advertising.

Google has changed the information given to users 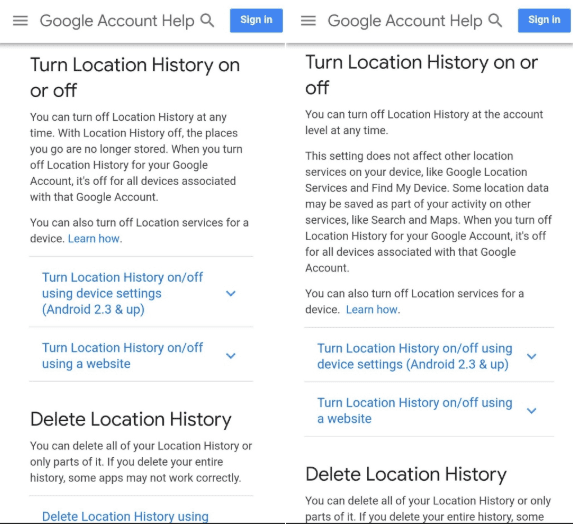 The image on the left reveals the information that was presented to users before the change and the one on the right shows the new information, which is now clear. However, it does not tell users clearly how they can disable this information collection.

According to the lawsuit filed in San Francisco by the plaintiff’s attorneys, a San Diego citizen named Napoleon Patacsil, the tech giant Google is violating California’s Privacy Invasion Act and the state’s constitutional right to privacy.

“Google expressly represented to the users of its operating system and applications that the activation of certain configurations will prevent the tracking of the geographic location of the users,” Patacsil’s lawyers wrote. “That representation was false.”

As collected by media such as Ars Technica, the class action could be divided between Android and iPhone users, so that a large number of users can join. Now, the judge handling the case will have to decide whether to approve the plaintiff’s request to go ahead with his claims and whether he can create a class action lawsuit for United States citizens who believe they have been affected by the tech giant Google’s practices.

But, if it happens, the tech giant Google could face a complicated legal situation for lying to users, or at least not telling the whole truth, and could be forced to pay a significant fine. But for that, as we say, it still remains for the judge to allow it to go ahead.

Recently, AP and a group of computer researchers at Princeton confirmed that the tech giant Google uses other applications and services, both on iOS and Android, to know and store our location for commercial purposes. This does not matter if we deactivate the ‘location history’ option, as in theory, this option should serve to stop this practice.

The tech giant Google went immediately to mention that they have always been clear and there are no secrets in this practice, “we make sure that the users of the ‘location history’ know that when they disable the product, we will continue using the location to improve the Google experience when they do things like doing a Google search or using Google to get driving directions.” However, on its support page, none of this was mentioned until it was changed a few days ago.

We will have to see if the demand ends up prospering and if it becomes a collective to which thousands of people can join to get a big fine for the company. But what is clear is that this hidden practice for commercial purposes are getting quite expensive for the tech giant Google, as the tech giant Google has not been clear with how it collects information from its users.