We all know very well that the iFixit disassemblies always show us the interior of the flagship devices that arrive at the market to discover all its secrets. However, now it has recently, disassembled the device to discover all the secrets hidden inside the iPhone X. And there are several surprises.

Contents show
iPhone X Secrets Revealed: It Has Two Batteries And Two Logic Boards
Other details of the interior of the iPhone X
Is it easy to repair?

The disassembly of the iPhone X that just made the guys of iFixit reveals how the tech giant Apple has completely renewed the insides of the phone, discovering new ways to include more features within its slim body.

The first surprise we have when finding two batteries cells in the iPhone X for the first time in a phone of the Cupertino. The combined battery has a capacity of 2716 mAh, a little larger than the battery found in the iPhone 8 Plus and its 2691 mAh.

iFixit says that the dual-cell battery design of the iPhone X is more about saving space than changing battery capacity. This design allows using “creative shapes and locations” so that Apple can take better advantage of the space left over. 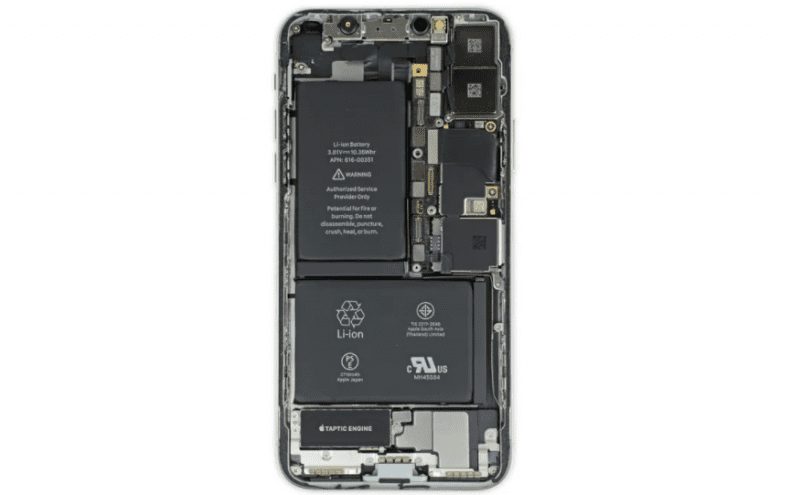 Despite this system, you can not expect miracles in the battery of the iPhone X, because as in other models of the brand will not last more than a day. When analyzing other components it is observed that the motherboard is 70 percent of the size of the iPhone 8 Plus. Again this is also the first board with the double battery in an iPhone.

Other details of the interior of the iPhone X

The disassembly of the iPhone X by iFixit also reveals the sensors that make up Face ID, the new form of identification that replaces Touch ID on the iPhone X. A fill light is embedded on the screen, which projects infrared light on the face of the user. The front camera then confirms the face and an IR point projector on the far right side of the device projects a matrix of points on the face, creating a 3D map. Finally, the IR camera located on the left of the screen verifies that map and sends the corresponding data to the iPhone X. 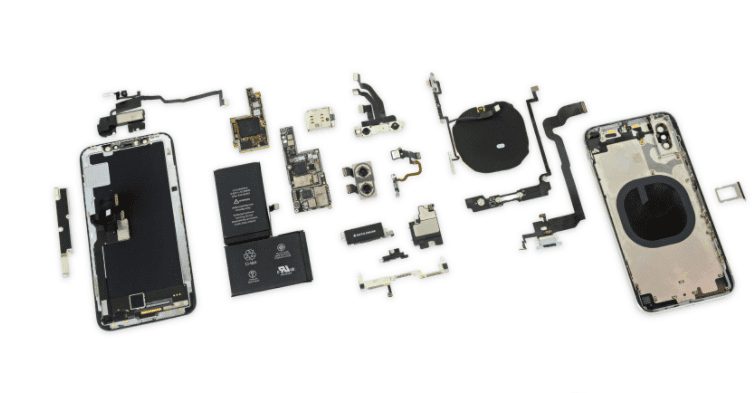 iFixit notes that the screen and battery repairs remain a priority in the design of the phone and that a vintage screen can be replaced without removing any of the biometric components of Face ID. Of course, the team warns that, if the rear glass is broken, it will be necessary to disassemble all the components and replace the entire chassis”.

Is it easy to repair?

The iPhone X has a repair index of 6 out of 10, being more difficult to fix than other large phones such as Google Pixel XL got 7. The other flagship of Apple, the iPhone 8, also obtained 6. Among the positive points stands out the ease of changing the screen and battery, while in the most negative aspect we have the presence of some elements to waterproof the iPhone X that complicate certain repairs, at the cost of protecting the device from water.