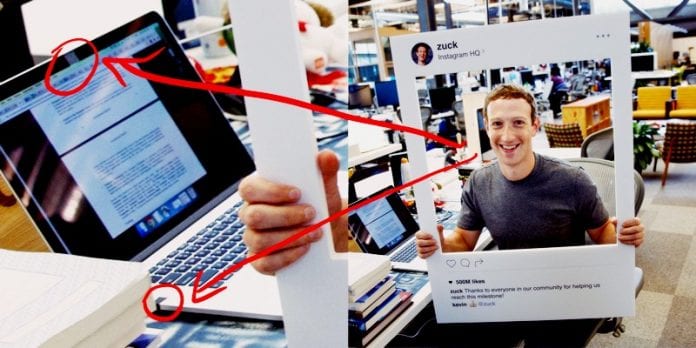 Facebook’s CEO Mark Zuckerberg is spotted using tape to cover up his camera and microphone of his MacBook to avoid getting hacked.

We recently noticed much news of hacks, security breaches, and many spying attempts. Therefore, the biggest question is how do you keep yourself guarded? We very often look up to some specialists or experts of the tech industry to follow their footsteps. Recently Mark Zuckerberg was spotted using tape to obscure the webcam and microphone of his MacBook.

It seems like the new height of panaroid because Facebook’s CEO Mark Zuckerberg was spotted using tape on his laptop camera to avoid being hacked. We had recently seen Mark Zuckerberg’s Facebook and twitter account hacked because of using a simple password “dadada”

Mark Zuckerberg recently posted an image on Facebook today celebrating Instagram’s 500 million monthly user milestone. Zuckerberg is seen sitting at his desk with an Instagram frame placard thanking users for the support. On his desk lie his MacBook and other things.

If we take a solid look at the photo then it looks like Mark Zuckerberg has placed a tape over the MacBook’s camera as well on the Microphone. Actually, this practice is not surprising, Hackers can control your hardware devices as well. Hackers can simply turn on the camera without the user permission.

It is normal that one of the most powerful people in the world fears being watched. Recently the founder of Facebook briefly lost control of his accounts on Twitter, Pinterest and LinkedIn after the hacker group OurMine Team managed to access them.

According to FBI director James Comey “Taping up your webcam is an excellent precaution, should you worry that someone might hack into your laptop.”