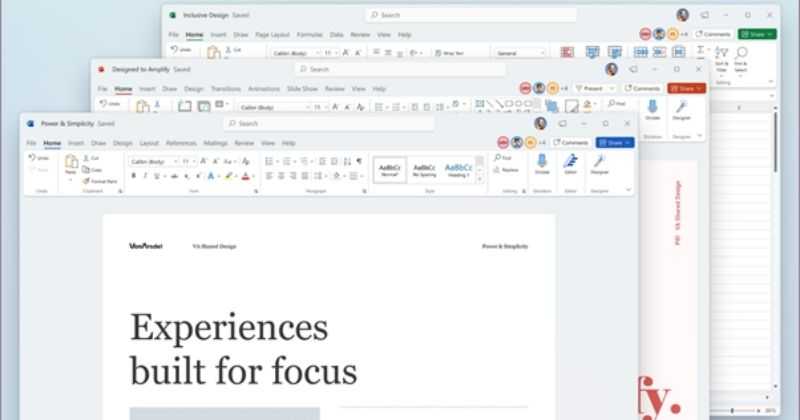 Microsoft has brought a new Office UI to all the users. The company announced the update earlier this year and was in testing in the summer.

The new Office UI is now available to all Office 365 and Office 2021 users. The new UI in Microsoft Office is designed to match the visual changes in Windows 11. There’s a change in the look of the Office ribbon bar, like tweaks to the buttons in Word, Excel, PowerPoint, and Outlook.

Microsoft Office will now match the dark and light theme that is set by the user inside Windows.

The new User Interface is now available for all Windows 11, and the company says almost half of the current channel subscribers will have the visual update enabled automatically.

One can toggle on or off the new look by using the Coming Soon megaphone icon that is at the top right corner of Word, Excel, PowerPoint, or OneNote.

With this, you can try out the new UI early in Word, Excel, PowerPoint, or OneNote. If you want to read more about the visual changes, then toggle on Try the New Experience in the Settings to your Office desktop apps. You can also toggle off the refresh and go back to the classic.

Most of the changes in design are fine, but Microsoft has brought more changes to its Office UI that include moving towards the command bar instead of the ribbon interface.

According to the reports, it is still expected to see changes in the web and mobile versions. Last year, Microsoft announced that the bigger Office UI changes might roll out in a year or two.

Originally, Microsoft introduced the ribbon interface in Office 2007, and now it’s coming beyond. The company is simplifying the ribbon on the web and mobile.