Microsoft Windows 11 Operating System is finally out, and now the developers have released the first preview of Android apps support. All the beta testers can test the apps on the Beta Channel version of Windows 11.

The company says that the Beta Channel users from the US can test the update on the eligible PCs, including Intel, AMD, and Qualcomm processors. The preview version is available to beta testers providing access to apps from Amazon Appstore. 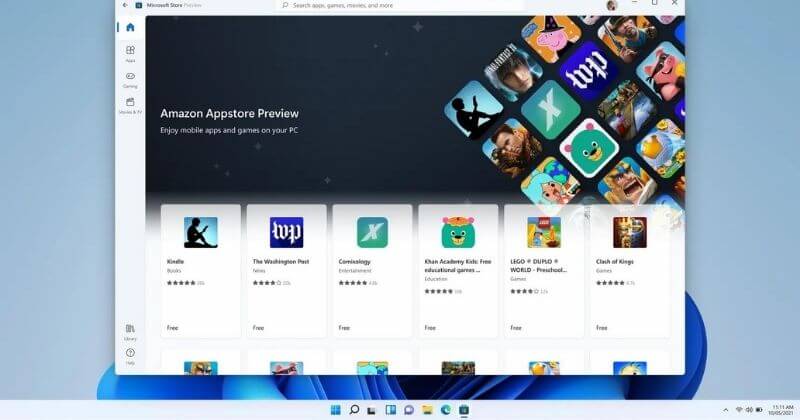 One can access the apps through the Microsoft Store that has a list of apps. Android apps can run side by side with other windows apps. Moreover, the apps are integrated into Alt + Tab and Task View, and then you can pin them to the Start menu or the taskbar.

In the Action Center, the users can check notifications or can share a clipboard between the Windows app and Android app. Earlier, Microsoft explained that the Android apps will be accessed through Amazon Appstore from the Microsoft Store. However, the apps catalog is less than Google Play.

Microsoft claims that the company has done a partnership with many app developers. The company promises to release the new apps via Windows Insider Program updates in the coming months.

The Windows 11 testers can now use apps like Lords Mobile, June’s Journey, and Coin Master. Other apps that are available for kids-specific are Khan Academy Kids and Lego Duplo World.

There is a subsystem built-in Windows 11 that enables the Andriod app support. There is Linux Kernel and Android OS based on Android Open Source Project (ASOP) version 11.

“The Subsystem runs in a Hyper-V Virtual Machine, like the Windows Subsystem for Linux.”

Microsoft has partnered with Intel to enable Arm-only apps that can run on Intel and AMD devices.