A few days ago, Microsoft rolled out a new update to Windows 11, enabling Android app support for all users. Before this update, Android apps were only available to Windows insiders via the Amazon Appstore.

In this article, we will share a full breakdown of the minimum and recommended system requirements to run Android apps on Windows 11. Let’s check out.

Important: The Amazon Appstore on Windows 11 is only available in the US. If you are not a citizen of the US, it’s recommended to skip the guide.

As you see, the hardware specifications required to run Android apps on Windows 11 are almost the same you need to install Windows 11. If your PC has more than what Microsoft recommends, it can run Android apps without any lag or issue.

However, Windows 11 don’t support a 32-bit processor, which might be a reason of concern for many. For Windows 11 specifications, please check our article Windows 11 Minimum System Requirements.

How to Install Amazon Appstore 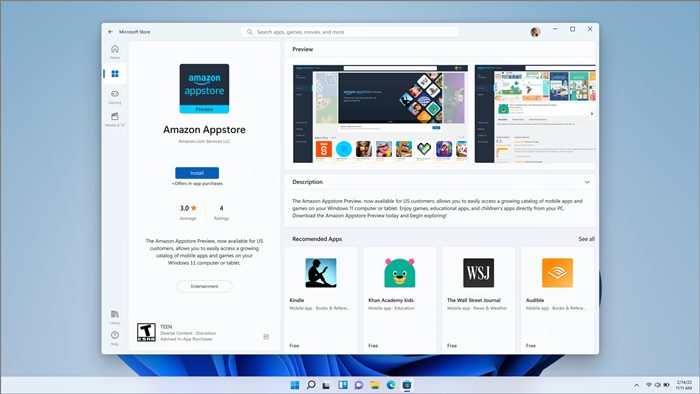 After installing Amazon Appstore and WSA, the Amazon App store will appear in the Start menu. You can use the Appstore to install an app on your Windows 11 PC. After the installation, the Android apps would appear on the Start Menu or Windows Search.

This is a complete detail of Windows 11’s minimum/recommended hardware requirements to run Android apps. Is your PC eligible to install Android apps? Let us know in the comment box below. Also, if this article helped you, make sure to share it with your friends.