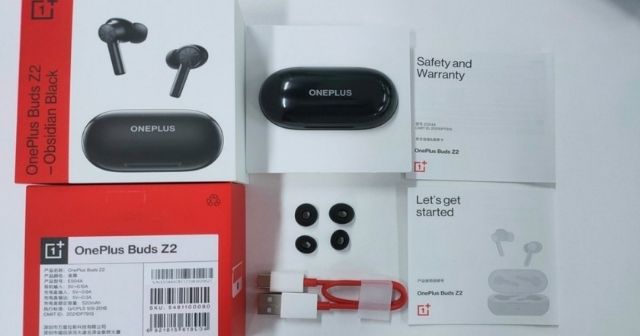 OnePlus is all set to launch a new wireless earbuds OnePlus Buds Z2 on October 13 alongside the OnePlus 9RT smartphone in China. However, the buds Z2 box images have now been leaked ahead of launch.

The latest leaks have brought some images that show the OnePlus Buds Z2 retail box that shows the design and confirms the color options.

OnePlus Buds Z2 will have deep noise reduction, long-lasting battery life, and better sound quality. The poster of the wireless buds is shared on Weibo.

A tipster named Evan Blass has posted a tweet that shows the OnePlus Buds Z2. It is said that the buds will come in the Black color option, and the box is of red and white color. In the box, there is the warranty documentation, a manual guide to get started.

Inside the box, there are two pairs of silicone ear tips of different sizes. Also, there is a USB Type-C charging cable in the box.

According to the reports, the new OnePlus earbuds will have Active Noise Cancellation (ANC) and Dolby Atmos. These earbuds will have a power-packed battery that delivers for around seven hours on a single charge. The earbuds will be sold with a charging case that provides about 38 hours of backup.

All of these details are not confirmed as the gadget is yet to launch at the event on October 13. Once the company launches the Buds Z2 and OnePlus 9 RT smartphone, all the details will be officially confirmed.

The company has officially confirmed the upcoming OnPlus smartphone’s global launch date. On October 13th, the successor to the OnePlus 9RT will be released in China.