According to the latest reports, after months of rumors, we finally gfinally learnedGalaxy Fold, the foldable smartphone from the South Korean giant Samsung. Hence, here we will tell you all the features, prices, and availabipricesof the all-new Galaxy Fold.

After months of rumors, we have finally been able to get to know about the Samsung Galaxy Fold, the foldable smartphone from the South Korean giant Samsung. Hence, here we will tell you all the features, price, and availability of the all-new Galaxy Fold.

Also Read: How To Clone One Android To Another

This device introduces a new category in the mobile sector since it is the first smartphone in the world equipped with the Infinity Flex screen with Dynamic AMOLED technology, which allows for carrying out multiple tasks simultaneously and offers excellent versatility. 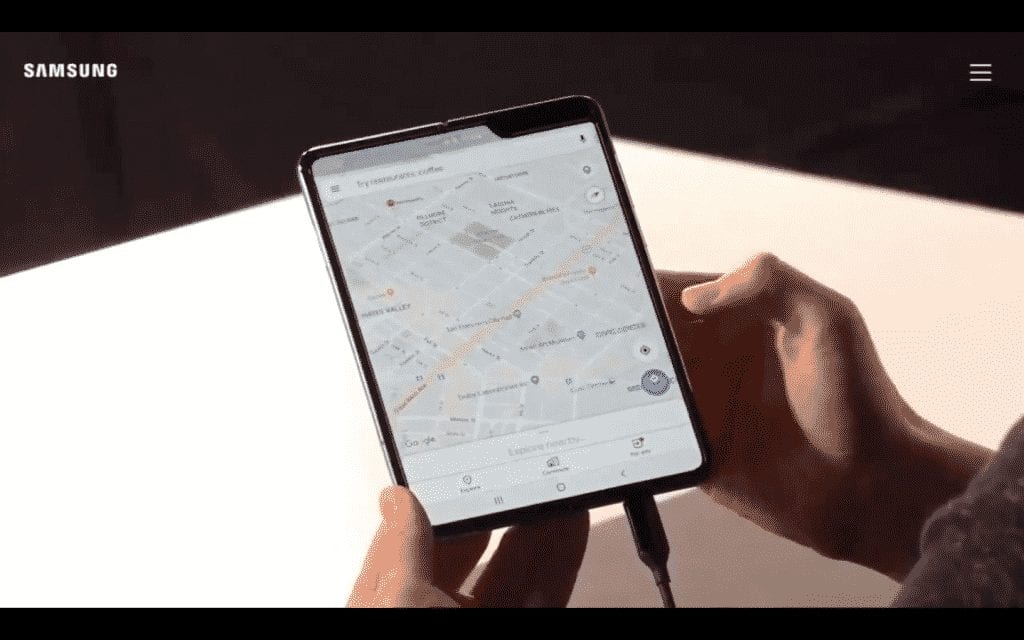 As we saw in the previous presentation that the South Korean giant Samsung made a few months ago, the Galaxy Fold is equipped with two screens: the main panel and the cover. The main screen is Dynamic AMOLED with a size of 7.3 inches with QXGA+ resolution and an aspect ratio of 4.2:3, while the cover panel is Super AMOLED and features a 4.6-inch screen with HD+ resolution and 21:9 format.

The main screen folds entirely with the help of the flexibility of its materials. It opens and closes like a book with a hinge mechanism that has a sophisticated means of union with multiple intertwined gears.

In the back, we find the triple camera system with a vertical configuration and the fingerprint sensor located on the side of the device, where the thumb is placed naturally. 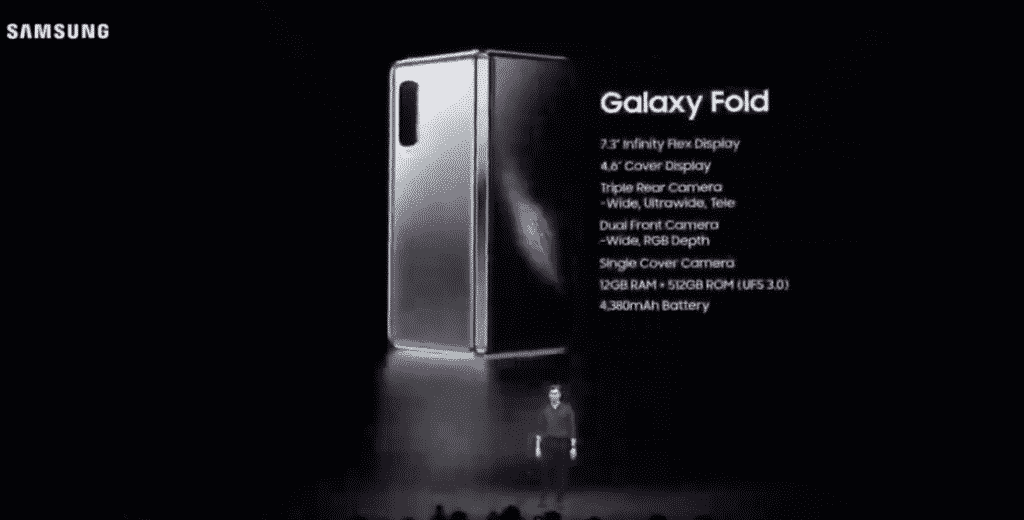 The Samsung Galaxy Fold has been designed for multitasking and offers users a fluid and optimal performance according to the new user experience. For this reason, in addition to an innovative design, the folding smartphone of Samsung has top-class hardware.

It has a 7-nanometer Octa-Core 64-Bit processor, 12GB of RAM, and 512GB of internal storage. In addition, it has a two-battery system so that autonomy never becomes a problem, with a total capacity of 4380mAh, compatible with fast charging (wireless and inverse), and the operating system is Android 9.0 Pie.

Moreover, the all-new Galaxy Fold has been designed for multitasking activity and can open up to three apps simultaneously on the main screen. In addition, it is possible to pass the apps from the main screen to the cover in a fluid and intuitive way. 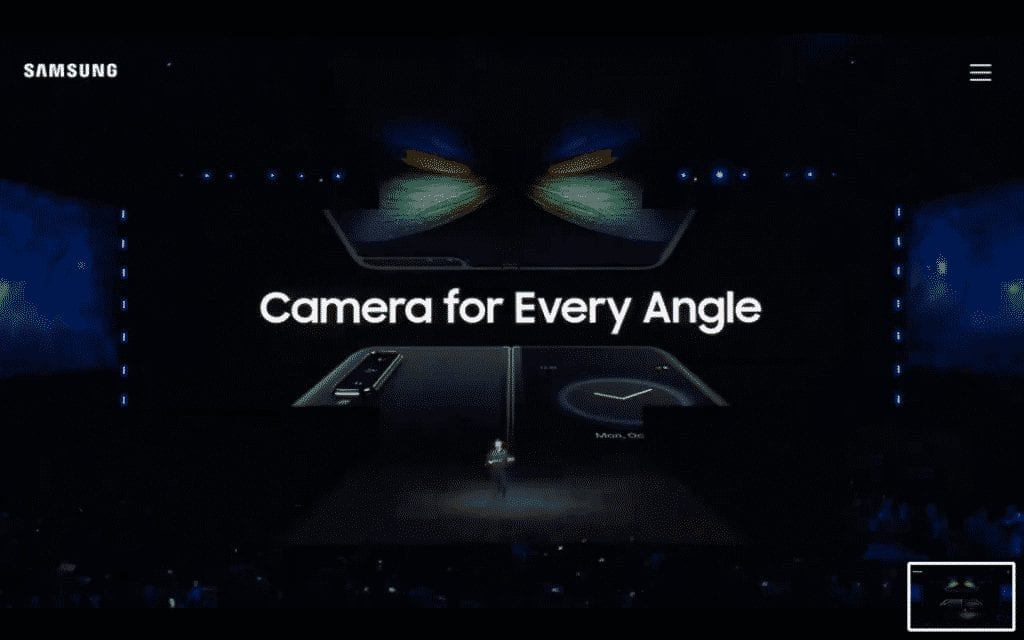 The Galaxy Fold has six cameras: three rear, two front, and one on the deck. The dual front camera consists of a standard 10MP sensor, and an 8MP depth camera, and the roof camera has a 10MP lens. The rearholdtem comprises an ultra-wide-anallowsallowsP lens, a 12-megnot to miss any moment, and a 12-megapixel telephoto lens. 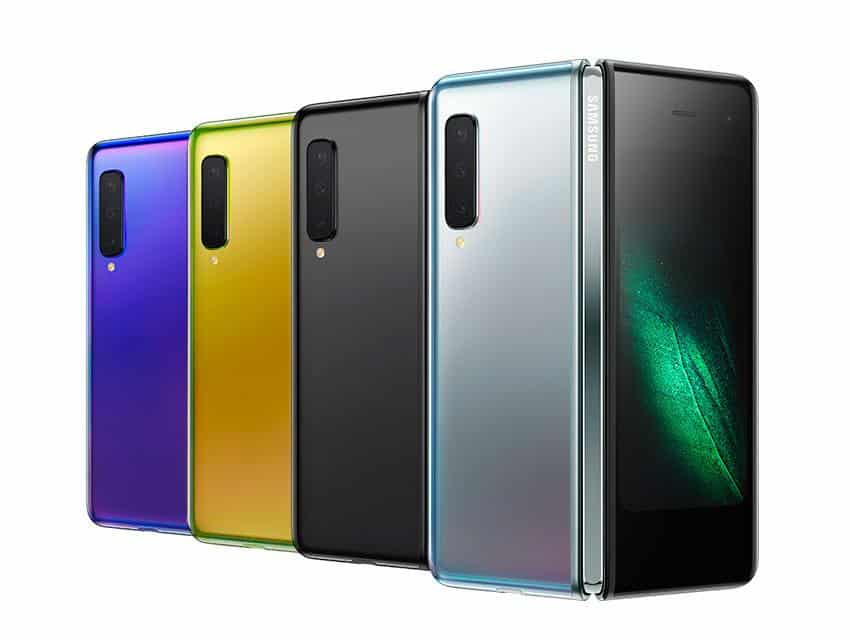 We should thank this configuration, regardless of how we are holding the smartphone, as this system merely allows us to be ready to not miss any moment and capture the moment with any of the cameras.

A doid at the beginning, the price of the Samsung Galaxy Fold is not precisely economical. Hence, the smartphone will cost $1980 and will be available from April 26, 2019. So, what do you think about this? Share all your views and thoughts in the comment section below. And if you liked this article then do not forget to share this post with your friends and family.