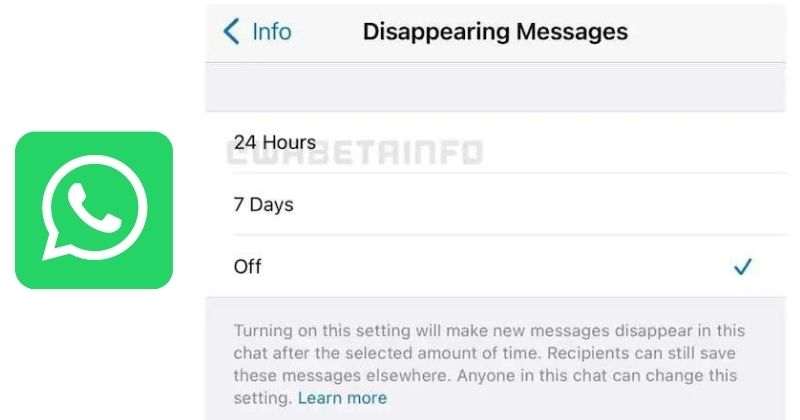 According to WABetainfo, Whatsapp will not replace the 7 days option, it will add the 24 hours option. A screenshot is shared on the website that shows the 24 hours option in the personal and group chats of disappearing messages.

Earlier, WhatsApp allowed only admins to control the disappearing messages, but in the recent update for iOS, it allowed everyone in the group to change the setting by default.

Soon, the instant messaging app will add the 24-hour option support in the section where you can enable or disable the disappearing messages feature. When the user will select the new option “24 hours”, all the messages will be deleted from the chat after 24 hours. However, the feature is still under development, and in a future update, it will be rolled out for everyone.

If you remember, the “Disappearing Messages” feature was released last year in November for Android and iOS. Many of them might have used this feature, so you will be knowing what it does.

This feature will be helpful in groups, as in one-to-one chat, a person can either turn on or off the disappearing feature. And in groups, the admins will control the new feature.

The instant messaging app started it with the seven-day limit and said,

“Because we think it offers peace of mind that conversations aren’t permanent while remaining practical so you don’t forget what you were chatting about”.

Once, the feature is enabled, all the new messages that are sent in a group or individual chat will disappear. According to Whatsapp, you must use the disappearing messages feature with trusted individuals only.

Apart from this, the Facebook Owned platform is testing a new feature of disappearing photos for both Android and iOS devices.