The meta-owned instant messaging app is testing a new feature that allows users to view the estimated time of arrival (ETA) while sending any file.

The Estimated Time of Arrival (ETA) feature is in beta testing for Android, iOS, and web versions. Whatsapp beta shows the ETA when sharing files, so you will know when the document is ready to open.

Last month, the desktop version of ETA was available and for beta Android and iOS, they have received it now. 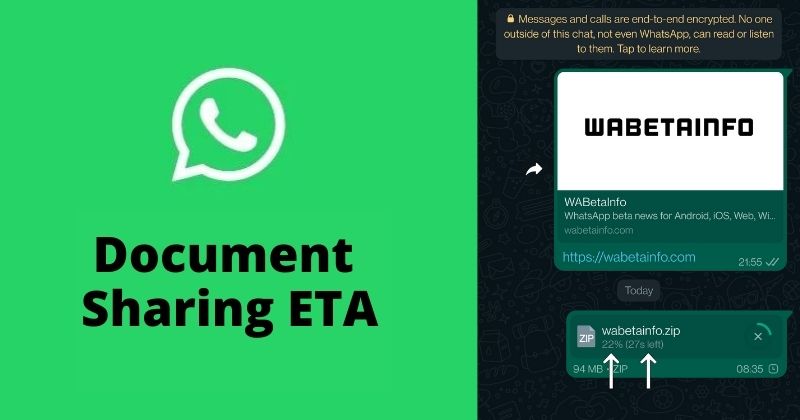 The ETA file sharing feature shows the same information that is seen while uploading a document. It shows the estimated time of arrival of the document.

WABetaInfo has shared a screenshot, that shows the new ETA label in the chat bubble. In the image, the document has the information that lets you understand when the document is completely sent or downloaded on the device.

Do remember, the feature is not yet available for all beta testers, so even if you are a beta user you might not be able to see the feature. As the feature for Whatsapp beta for Android and iOS is released this week, so gradually all beta users will get it.

Normally, Whatsapp users can share files up to 16MB. So, the company is trying to increase the limit up to 2GB which is similar to Telegram which was introduced in 2020.

Apart from this, Whatsapp is also testing new drawing tools on iOS. The new tools are two pencils. The existing blur tool is moved to the bottom bar where the two new pencils are available. The blur tool is available under the color bar. The tools are a part of iOS beta version 22.8.0.73.