Whatsapp has been spotted working on new advanced privacy settings in iOS Beta. The latest beta update 22.9.0.70 for WhatsApp iOS introduced a new option named ‘My Contacts Except‘.

As WhatsApp recently announced a new community tab feature so these new privacy settings might be helpful to users.

WABetaInfo has reported this ‘My Contacts Except’ option, which is currently under testing, and only some of the lucky beta users accessed it. 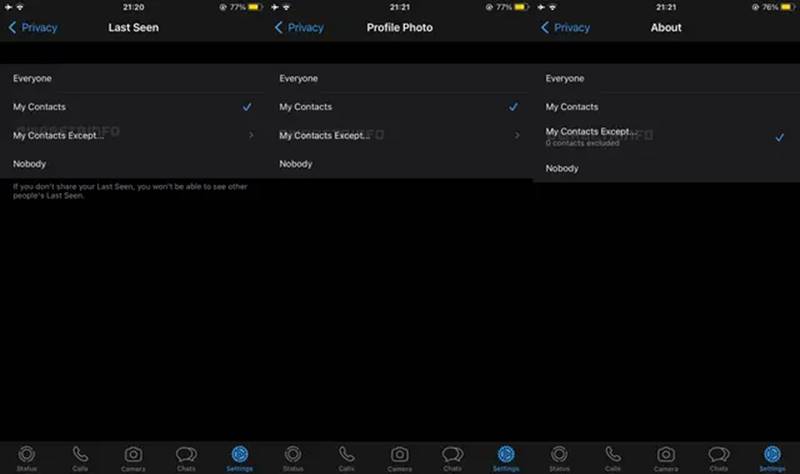 When the ‘My Contacts Expect’ option will be added, you can access the feature from Settings -> Account -> Privacy and it will work for last seen, about section, and to profile photo. As you can see in the screenshot how it will look like this.

This new option will allow iOS users to hide their last seen status, about section, and profile photo from the selected contacts. You can assume this feature if you have the Status hide options in WhatsApp.

Besides, the Last seen hide feature doesn’t mean it will also hide your Active Status, your contact will still be able to see the ‘Online’ indicator after your name in the conversation even if you have selected to hide from contact.

The WhatsApp Android Beta version already includes this My Contacts Expect option in privacy settings and now it has also rolled out to iOS.

WhatsApp is also moving forward with some other significant features like a community tab, which the company has announced to launch later this year, there might be a chance they also introduce the ‘My Contacts Expect’ option with this update for both Android and iOS.