Microsoft is constantly improving Windows 11 by bringing major changes. From the time the company has released its first public release of Windows 11 in October, Microsoft has been testing a new media player, redesigned Notepad, a new volume slider, and more.

With the latest Insider build, Microsoft is spotted testing a redesigned Task Manager with dark mode and a new design.

The Task Manager is getting a new design that matches the new Fluent design language of Microsoft. It looks that the company has hidden the new design, but engineering student Gustave Monce has uncovered the news and shared it on Discord.

Windows 11 to Get Redesigned Task Manager 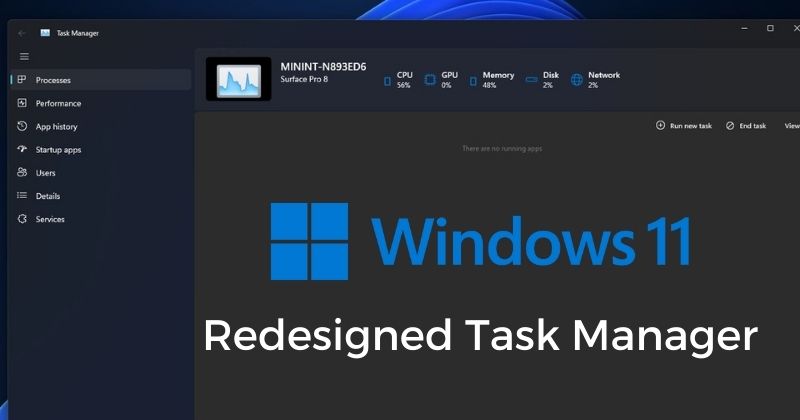 Microsoft has not officially announced about the redesign task manager, though one can enable the new Task Manager in the latest preview builds of Windows 11.

The new design is still in the early days, but it has a dark mode and interface that matches the Windows 11 design, rounded corners, and pastel shades.

Gustave Monce is popularly known for running Windows 10X and Windows 11 on the phone. He spotted the redesign task manager in Insider build 22538. The existing Task Manager tabs are replaced with a sidebar to switch between various sections.

The new Task Manager comes with dark mode and rounded corners and follows the guidelines of Fluent design.

Task Manager was originally debuted with Windows NT 4.0. For around 10 years, it did not have any significant changes after it was overhauled in Windows 8.

All of these details are not yet confirmed, so at present, we don’t know what changes might occur until it rolls out officially. If you are using the latest development build, then you can access it, and FireCube provides you tips on how to do it.